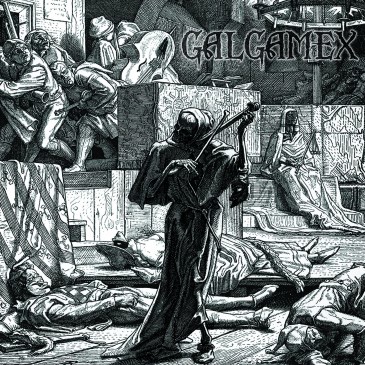 Galgamax’s new album Cult ov Death, released a year after their self-titled debut EP, buries the nail in the coffin, so to speak. After a very ‘90s, mandatory introduction, complete with an obscure sample and short acoustic guitar piece, Galgamax dives into technical death-grind metal, with enough impeccable virtuosity and brutal aggression to scare both your grandmother and your little sister.

The main concern that one could have regarding Cult ov Death is the sense of similarity drifting throughout the album. However, the alternation between two separate vocal styles–a high-pitched scream, not too far removed from Soilwork circa The Chainheart Machine, and a typical death-metal growl–helps bring a bit of diversity in an album which may otherwise sound too consistent. This can be both good and bad, and it will certainly appeal to some while make others yawn after the first two songs.

Brutality is a given in the genre, but Galgamex are at their best when stretching their pieces out, indulging in groovy breaks and classic heavy-trash moments, as with “Lightspeed Sarcophagus.”

All in all, Cult ov Death is a very enjoyable album. The production is flawless and gives a crisp and clean sound. Maybe it is a bit too clean, but that’s a matter of personal taste; one could look to early Dark Tranquillity for comparison. It would be very interesting to witness a live appearance as this kind of death-metal transposes nicely to stage, contrary to acts such as of Portal whose abstruse wall of sound requires a heavy-duty sound system.