Continued from the May issue, here’s part two of Erica Leiren’s tale of Slow at Expo ‘86, and the aftermath of the controversial event.

While Slow’s roadie made sure the on-stage equipment was ready, the audience’s anticipation combined with the energy exuding from the stage to build the air of an electrical storm. Crackling. The musicians sauntered on from back stage, and each took his place: Russell at his drums, Hamm, Ziggy, and Thorvaldson behind their guitars. No Anselmi yet. Then suddenly, the storm broke.

Russell lit up and pounded out the drum roll from Hogan’s Heroes. Tom lurched onto the stage, goose-stepping, giving the straight-arm salute, and with his finger held under his nose mimicking a military mustache. Saluting the audience and yelling, “Sig Heil, Sig Heil, Bill Bennett Sig Heil!” as he marched around the stage. With that, the band blazed into their first song and the audience crowded up closer to the stage, some standing at the front, and others ringed around on the risers. It was the gloaming. The time of evening neither still light, nor yet totally dark. The sky glowed dark blue.

Slow played like their lives depended on it. Like they didn’t care. The way they played best. Tom’s guttural, growling delivery was more intense and tormented than ever. And the band matched their energy and power to his. Part way through one of the songs — maybe “In Deep,” or “Have Not Been the Same,” or “Against the Glass,” or “Bad Man,” or “Looking for Something Clean” — Anselmi reached down and started to undo his pants. We watched in disbelief as he let them fall around his ankles and gave the audience and the great big night sky a good look at his boxers. Then he turned around and half-mooned the gathered fans.

To be honest, it wasn’t really that big a deal. The audience and the band both handled it. But after Anselmi dropped his pants, the organizers got skittish and pulled the power. Right after that, Hamm let his down and gave everyone a good show. Maybe a few passersby were shocked, but we’d all seen rowdier behaviour at any hall gig you could care to mention. And besides, this is what you hoped for when you went to see a Slow show, wasn’t it? Something exciting and unexpected was supposed to happen. The boys had delivered, and somehow given us just what they knew we wanted.

But this time was different. This was Expo ‘86, and there was a wider audience. I think what really started the riot rumour was when Rob Elliott [vocalist from the Soreheads] ran up to the TV broadcast booth’s window and began pounding on them and yelling. But that was just Elliott. Everyone who knew him knew he was a fun, harmless, and excitable guy. But the TV crew didn’t know him. The cameras focused on him, and the image of the ranting hooligan on the news that night blew everything way out of proportion. He got arrested.

“Hey Dad, I’m in jail … Ha Ha Ha!” Suddenly, there had been a riot at Expo that night. Unthinkable antics and nudity had occurred. The audience had gone berserk!

The rest of the music series got cancelled after that.

I played once more with Slow, in my third band the Hip Type. Our singer, Tracy Brooks, was fabulous, a show-stopper like Anselmi. The kind of lead singer you could always feel confident on stage with, because even if you broke all your strings or had to stand through twenty minutes of dead air, they made the show go on. They could fill the space. They were that charismatic.

Brooks was the Hip Type’s punk rock princess. She combined Jean Harlow’s striking glamour and Mae West’s bawdy wit and sense of humour. She was a superb lyricist and singer, with a taste for provocative song titles: “Glass Pussy,” HoneyTrap,” “Love for Everyman,” “Jaguar Princess, “Wilder Shores of Love” and “Bluebottle Flies” were a few of the hits she wrote with our brilliant guitarist Patrick Findler. Our single on Life After Bed Records (produced by CBC Radio personality, Garnett Timothy Harry) pictured the cartoon kitty of the song title, with a big red heart pumping in his chest.

The Hip Type were booked for the Zulu-sponsored bill at the Town Pump, along with a band from Seattle called Green River and headliners Slow. During our soundcheck, I was playing my usual bass riff for the soundman to set levels: “No Lip,” by The Sex Pistols. I heard from my boyfriend later (present for soundcheck), that I got some kudos from Green River.

“Hey, listen. She’s playing the bass line from that Pistols song we couldn’t nail.” It felt good to hear that — a few years later, Green River split and some of the members formed Pearl Jam, some Mudhoney.

Green River opened the concert, and warmed things up nicely for our band. We played a great set, excited to be sandwiched between two superlative acts. We played exhilarated by the atmosphere that always swirled around every Slow show.

Slow closed and were astonishing, as usual. We watched from the floor, slavish fans just like everyone else in the audience that night. What we didn’t know at the time was that this was Slow’s last show. Soon after, they broke up, reformed, and signed to a major record label to conquer the world.

But by then, I think they had already done that. 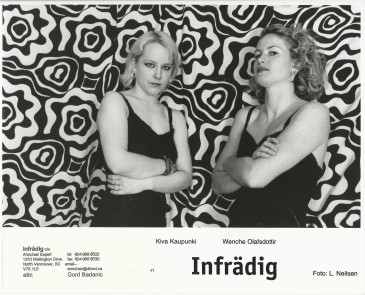