The idea of Infrädig was born in the summer of 1992, which I spent in Norway.

I took the summer off work to attend the University of Oslo International Summer School and really nail my Norwegian. Dad was from a small town on the fjords of Western Norway and he always teased me, “It’s a dead language, so why bother?” For some reason, that only motivated me more.

One night, while out on the town of Bergen with my university friends, we stumbled into a dark, subterranean club called The Garage. It felt like we were at the edge of the world, so remote from anywhere else, that I was amazed when Iggy’s “The Passenger” came on. Hearing that song so far from home was weird, but in a good way. I imagined how cool it would be if my band, the Hip Type, had come to Norway. They would have loved us in Bergen—return of the conquering heroines and all that. Though we’d broken up three years prior, the germ of an idea began to form.

In 1996, I called up my former bandmate Tracy to brainstorm forming a band with a Scandinavian flavour. We’d both grown up with Scandinavian traditions, immersed in the food, accents, and unique foibles of the Nordic character, and so we decided to create our own back-to-our-roots band: Infrädig. We wrote our entire band bio that day, creating the personas of two Scandinavian-style supergirls from small towns in the extreme north. Our conceit was that we were a band from Norway and Finland who moved to Vancouver to perform while studying at SFU. We named ourselves Kiva and Wenche (pronounced Ven-ka) and, along with our friends Gord, Tony, and David (now Bjorn, Lars A, and Lars D), we soon hit the basement studio and cut six songs at our 1997 recording session.

Until now, Infrädig had been a top-secret project, known only to those in the band. With the recording complete, our next step was to play live and for that, we added a sixth member, Sigrid (Louise, my friend from the UBC rowing team and the Debutantes). The occasion was a big Halloween party we threw at the storied Room #1 at North Van’s NAL Sound Studios. The place was packed and even had a smorgasbord set out for everyone to enjoy between sets. We opened with XTC’s “Life Begins at the Hop,” and if you were there, you’ll remember the festivities well for various reasons, including Kiva and Sigrid’s surprise flash-dance!

Infrädig gigs were performance art—we always stayed completely in character as our Finnish and Norwegian alter egos. We spoke with the correct accents, hosted an acquavit-tasting contest between songs, whipped the audience with birch bark sauna whips, served pickled herring and knåckebrød, and other exciting stunts during our set. We covered the Archies’ “Bang-Shang-A-Lang,” the Modern Lovers’ “Roadrunner,” and of course, “Does Your Mother Know?” by ABBA.

We even had a fan club in Norway that my cousins ran out of their bedroom. We were interviewed (in character) by various local newspapers, including our favourite, the North Shore News. Another time, we were on our way to meet up for an interview and photo session with Province music writer, Stuart Derdeyn, when he recognized us as Erica and Tracy from the Hip Type and our cover was finally blown! We continued to play through 2001, but our swan song was a dramatically aborted gig at Rockridge High in West Van.

The band was all plugged in, on stage and ready to play, with the enthusiastic young audience gathering on the gym floor in front of us. But our lead singer still hadn’t arrived. Suddenly, Sigrid’s cell phone rang. It was Kiva, calling from home with a traumatic tale. Kiva had been dyeing her hair blonder for the gig when fate struck a tragic blow: she’d accidentally swallowed the bleach that had run down her face and it stripped her throat, leaving her unable to sing.

We were devastated. With no lead singer, there was nothing else to do but cancel our performance. It was a tough way to end such an epic project, but by then Infrädig had run its course. The accident was like a sign from the gods; our time was over.

You could say that Infrädig has now entered the hallowed halls of the immortals. Thank you for being a part of it all. Let’s raise our glasses now in toast and together cry “Jeg husker Infradig! Skål! (I remember Infrädig! Skål!) 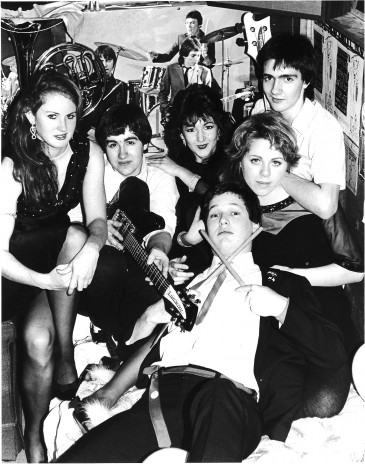 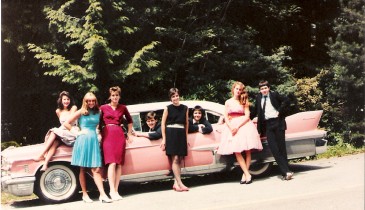