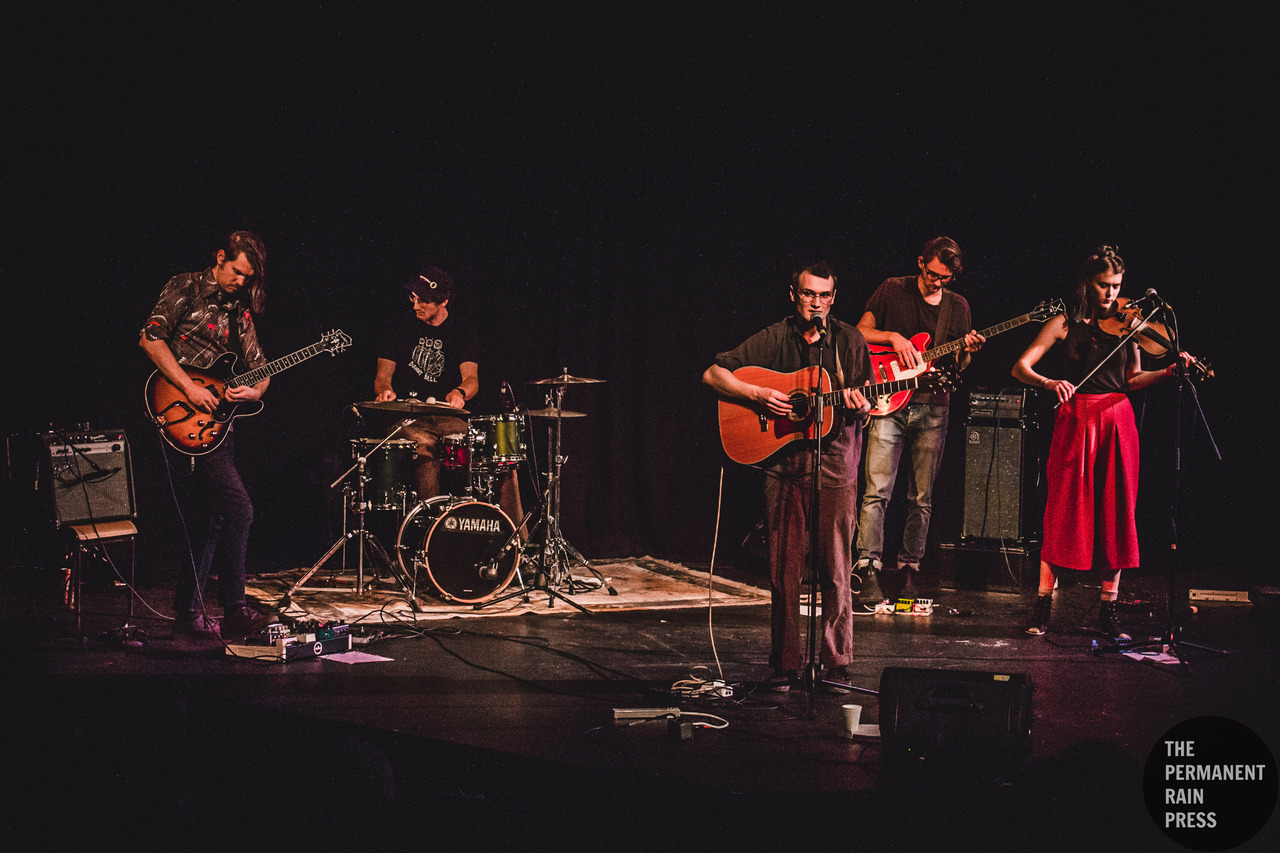 Photograph Courtesy of Ray Maichin for The Permanent Rain Press

Sam Tudor and band came home to a rapt audience. The final show of their Quotidian Dream tour demonstrated vanloads of professional talent that folk-pop fans across the country ought to keep their ears on.

Red Gate Revue Stage is an awkward venue. Despite theatrical amenities like a thrust stage and enclosed tech booth, the house feels like a cross between a dive bar and an ice rink, with a sterile, fluorescently-lit lobby that resists all efforts to make it look clean or, indeed, like part of the building, which itself sits uneasily at the periphery of Granville Island’s bourgeois glitter. But Red Gate’s new venue has a redeeming feature: its sound system. And on Friday night, the tech team did a classy job, lighting the instruments before the show in a way that fomented mystery and anticipation, and then, once in the thick of things, bringing out the performers’ voices with a clarity rare even on the fanciest stages around. The audience was able to transcend its location. Phones were put away without anyone asking. The venue choice was vindicated.

First up, singer-songwriter My Sister Maria delivered a set marked by both extraordinary potential and questionable judgement. At the guitar, My Sister Maria is a competent performer with an amazingly smooth voice. (Alas, the guitar half of her set suffered because its songs, by MSM’s own admission, had been written just days prior to the set.) At the keyboard, though, My Sister Maria is a brilliant musician whose idiosyncratic time feel—which manages to combine a jazz drummer’s deliberate consistency with a fin-de-siècle salon pianist’s affinity for rubato—is the product of genius, and whose voice and presence befit any size of stage. If she focuses her act around her strengths, I think My Sister Maria will reach a very large audience.

The middle act was Devours, an affable, sparkly-costumed performer with an outstanding ability to integrate keyboards with DJ material. Devours makes synth-wave pop, whose grooviness clashed with Revue’s lack of standing area, although some audience members (including yours truly) danced in the wings anyway. The strongest part of the act was the song “Friday Night Fur,” a rant about Tinder culture, whose lyrics leapt from the boring (“Have fun / Swing by your house / Because I need the release”) to the startlingly on-point (“Can you imagine a life without this tragedy? / Follow the script, read back your lines to me / If we get hurt it was the only way”).

In contrast to the bittersweet catharsis Devours offered, Sam Tudor’s performance initially kept its tension coiled. Drummer Harry Tudor was rock-solid if never relaxed, guitarist Craig Aalders was precise but quiet, and bassist Jasper Wrinch was understatedly tasteful. Violinist and backing vocalist Tegan Wahlgren is a virtuoso in her own right, sounding at times like a more aggressive Garnet Rogers circa 1982, but her solos never cashed out more than a fraction of the foreboding twisted up in the band’s arrangements.

The programmed set was eminently respectable. But Tudor’s encore, a solo version of “Joseph in the Bathroom,” burned its way into my memory like no performance has for a long time. Tudor used the microphone only for the banter and the first verse, then stepped away, realizing that his clear, bright voice was enough to fill the venue on its own and that its un-amplified tone complemented the song’s subject matter.

I think Tudor’s lyrics are sometimes imprisoned by their quotidian-ness — in stories about songwriting, for example, or of being depressed in one’s room — which produces a tendency to string metaphors together until they don’t add up. Things change when Tudor steps outside of himself, applying his introspective exactitude to another person’s point of view. “Joseph in the Bathroom” is the account of his experience as a bystander observing the bullied among his high school peers. The song reveals a depth of consideration so devastatingly on-the-head that it feels exhausting to consider at length. When Tudor sang of wanting to “pull out all the circus pegs” of the absurdity that was his high school, the sentiment impacted the audience not because it is positive or pretty, but because it is true — and, as Tudor knows, all the more haunting given that it can be expressed only now, so far removed from the time, place and people who needed it most.

Although the main set didn’t get a standing ovation, the encore sure as hell did. 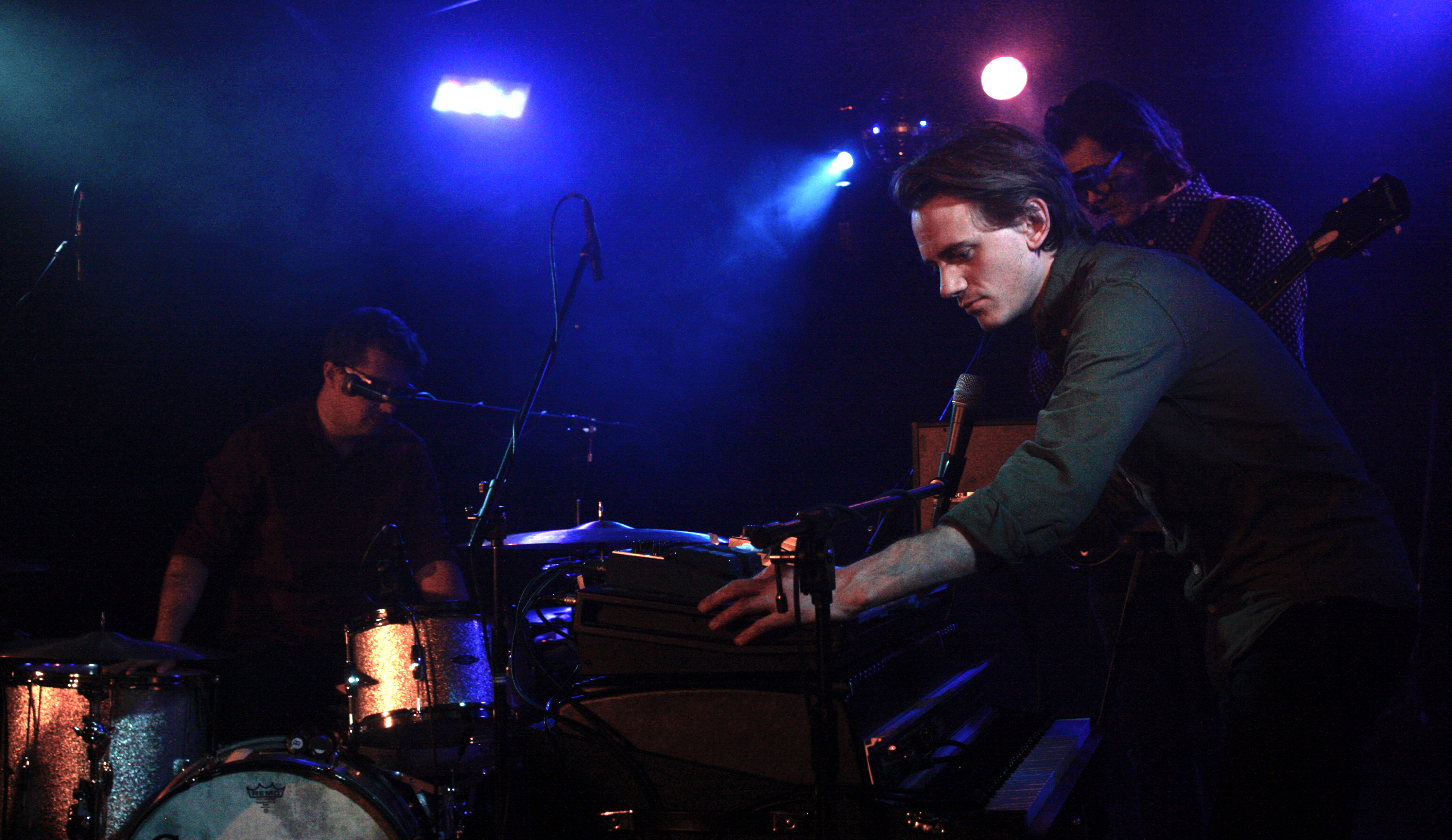