On a clear summer day, Vancouver residents flock to their favourite park like animals to an oasis, laying out blanket, and nervously plucking at blades of grass. Traditional Indigenous sites, colonial clearcuts, the result of an over-zealous urban planning committee, an impromptu lunch spot, or anything in-between, Vancouver’s parks run the gamut of the good, the bad, and the ugly. We decided to ask some local musicians about the parks closest to their hearts — the results are a hazy collection of industrial backwash, natural serenity, fuzzy feelings, and slow afternoons. 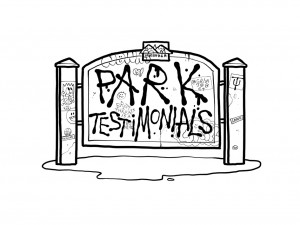 “One summer I got a flat tire biking down Yew Street. There was a cold spicy chicken burger from Wendy’s in my backpack, which I ate on a bench near the ocean. One person in a wetsuit swam really far, displaying a stamina I could not comprehend. It was a pretty good afternoon.”

“I like it here the most because Coal Harbour is both empty and familiar at the same time. It’s futuristic. It’s great.”

“I moved to Vancouver from Montreal in 2010, and having been a fan of Japandroids, I was determined to find out where they were photographed for their No Singles cover art. Soon after moving here, I started dating someone who wanted to show me around the city; he brought me to Crab Park one summer evening to watch the fireworks, and as we stood on the pier, the mystery solved itself — I was standing right where their album cover was shot. It was a magical, starstruck moment, and everything has been downhill since then.”

“W.C. Shelley Park is overall kind of gross, but has perks. If you’re trying to get rid of old furniture or electronics, Shelley Park is your zone. Also a hotspot for cigarette smokers, so if you’re into cigarettes you may bump into some like-minded folk who frequent one of the three benches in the park.”

“Ever wanna get lost in nature, but not so lost that you forget about global shipping vessels? Then I’ve got the place for you: it’s peaceful, it’s strange, it’s grassy and industrialized, it’s a miracle of the paradoxical modern world and there’s a damn outdoor swimming pool right next to a beach. It’s New Brighton, and I’ve never seen a cop there.”

“There certainly is a place for everyone at Tea Swamp Park. After nightfall, expect the unexpected — the uncanny wisdom of anonymous drunken monologuing or perhaps the surely uncomfortable public displays of sexual affection splayed out upon the parks pointedly placed benches, decorative boulders, or on very special summer nights, the tenderness of Mother Earth’s grassy boudoir.”

“For 2 years I lived in Dunbar and I used to go that park a lot. One day me and my roommates hung out there for hours and by the end of the day we became best friends.”

“It’s a good place to jump into the water and build an immunity to filth.”

“Trout Lake is my favourite park because you can walk around and look at all the dogs, and have a huge party with all your friends. If you sleep in your car there it feels like you are camping, but you can still go to Bon’s in the morning.”

“Stanley Park is the main attraction, for me it’s all in the colours — that mix of green and blue skies, browns and sunshine just gets me all the time! It’s perfect for a bike ride, a little shade picnic and just a long walk to take it all in.”

“In the summer of 2013 Felix and I would hang out in the wee hours of the night at Prince Edward Park, after work. Sometimes the daycare there would leave their bucket of sidewalk chalk — we found it and used the chalk to write about how sad we were. Eventually we would write a song about the park, too.”

“Sean and I don’t have a dog but we really like them, so we often walk down to the dog friendly beach at Sunset Beach Park and watch the doggos play like a couple of creepers. We never pet the dogs because we feel like it would draw attention to the fact we don’t have a dog. We are always the only people without a pup.”