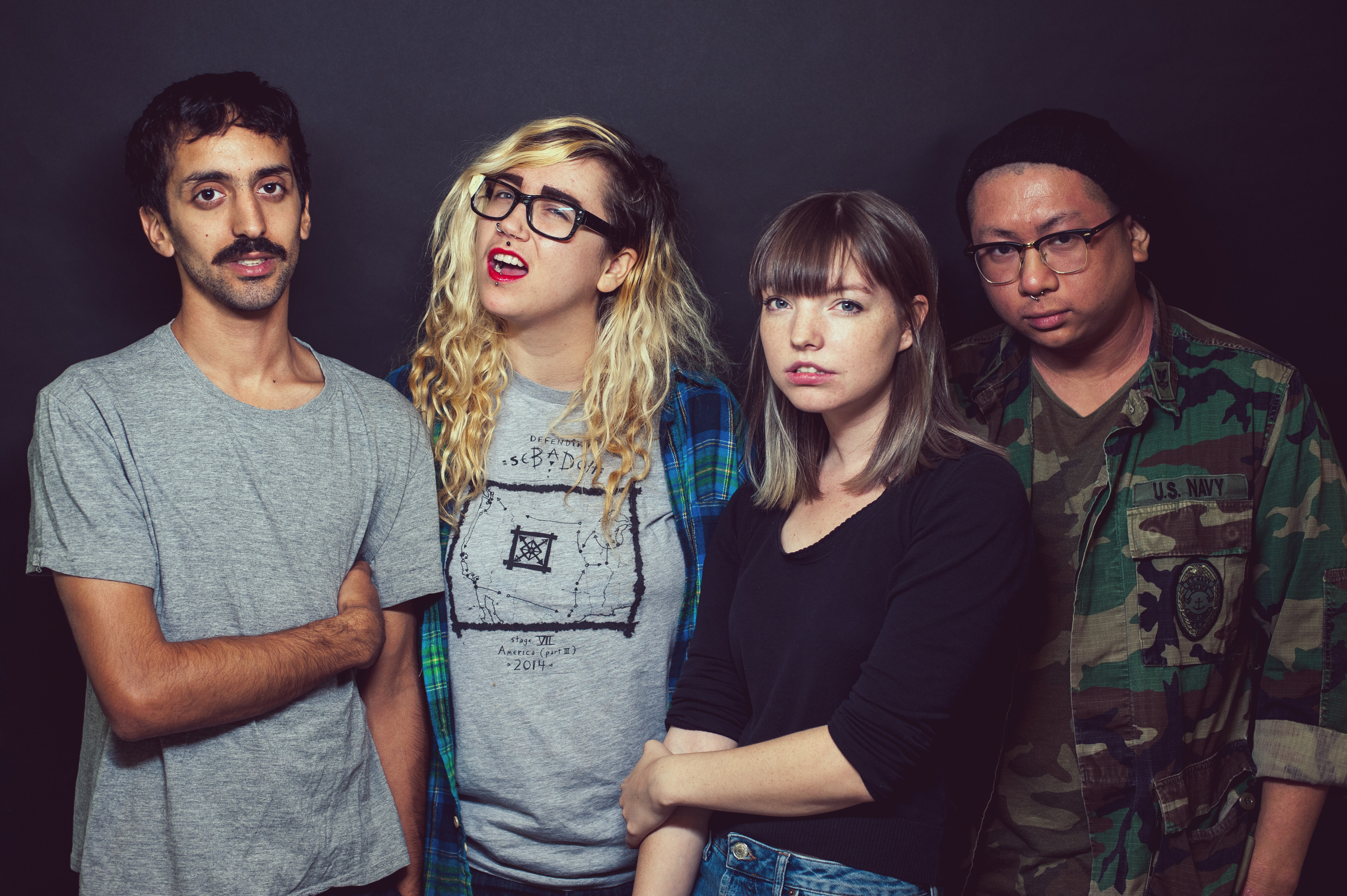 I am greeted at the front steps of the house tv ugly use as a jam space by blaring guitar and a very friendly, very fuzzy, grey cat. The music stops, and Dan emerges into the yellow light. When Alie, Rage, and finally, Gal, settle into the couches on the porch in the warm night air, I get the low down on how the four musicians — each multi-instrumentalists — came to form the garbage pop punk project that is tv ugly and what’s behind their first EP, UCLA Yankee Cola.

“We started playing Simpsons trivia,” Rage and Alie chorus. Gal and Dan came into the picture through a member of Dan’s other band, Thee Ahs. “[She] was like ‘Why aren’t you in a band… you should make a band with Alie!’” Gal recalls. Because all members rotate instruments like a Rubik’s Cube, there was no pressure to fill any of the roles and the group came together pretty organically. The four didn’t actually hang out together until the band was formed, a fact I find inexplicable, but one that tv ugly seems to take in stride.

“I think we all had a mutual love of pop punk” Alie says, laughing. The four list Sum 41 (UCLA Yankee Cola is all killer, no filler), and the Pixies as top influences. “We all don’t like the same stuff, too,” says Gal. With a collective snicker, the group sites Phish as a band that they will never be interested in sounding like.

“We’re a really pop culture oriented band,” says Rage. The name tv ugly, as well as the title for the EP are Simpsons references. “I’d been sitting on that band name for a long time,” Rage says, “[It’s from the episode] where Moe gets plastic surgery and there is a flashback to him trying out for a soap opera and they make reference to this concept of like, being ‘TV ugly’ which is where you’re just attractive enough to play an ugly person on TV.”

The band’s new merch t-shirt features Ross Geller from Friends, a classically “TV ugly” guy. Not every member of the band was stoked on the design, but it seems like that’s the only rough patch in tv ugly’s path as band mates.

“It’s easy with tv ugly because our practices don’t take that long and we don’t argue. It’s really productive,” Gal explains. In fact, the ease with which the band creates together seems miraculous. “We usually all write our own parts, like one person will come in and have the backbone of the song … and then we all just build around [that]” says Alie. “It’s surprisingly easy … I’ve never not liked a part that someone has made up,” adds Rage.

It seems like all four members have a sixth sense for what the vision of the band is, and what the other three members will be into playing. Gal elaborates, “I don’t think any of us are going to come to the band with a song that we know we’re not going to want to play.” As Alie explains, “people take it in directions you maybe didn’t expect them to,” and in this way, the band is united by their mutual musical taste rather than specific pre-discussed ideas about genre and sound. “I think we also kind of like it to be a little bit eclectic,” she adds, “[We] like every song to be a little different from the next one.”

UCLA Yankee Cola is about as eclectic as it gets for a six song collection. The first track, “QC,” is straight up pop (very reminiscent of Alie’s other band, Supermoon). “Werewolfing” moves into darker territory with grungy, distorted guitar. The third track, “Night Before,” jolts when Gal’s punk vocals come in instead of Rage and Alie’s female surf pop voices, which dominate the rest of the EP. “Shit Eating” is a song to mosh to, while “Slow Thighs” is more of a laying in bed lament. The final track “Trash Party” is a dance song with riot grrrl roots that ends the EP with a bang.

tv ugly’s sound is the unfiltered result of what the four members are experimenting with. “I love power chords,” says Dan, “In Thee Ahs we don’t play power chords, which I like too, but I just love straightforward music and I feel like our songs are just so straightforward.” Building on this Rage says, “I think it’s safe to write a straightforward jam… Then there is so much room for people to make it [something different].”

The camaraderie on the porch between the members of tv ugly is both adorable and admirable. When discussing their upcoming tour, Alie says, “I like playing car games. I like playing 20 Questions.” Rage is quick to shout, “I like playing 20 Questions also!” tv ugly also love the Food Network show Chopped, and they spend a few minutes devising an in-car version of the cooking challenge in which competitors have to make meals with strange ingredients. “Are we going to actually chop people?” Alie asks. “How is that going to work?”

When I left tv ugly to their band practice, I realized that the title sequences in both Friends and the Simpsons feature the main characters sitting on a couch. And there they had been, sitting on a couch in the spotlight, just like on one of those shows. It dawned on me that their kind of musical compatibility should come as no surprise, since they seem to be starring in their very own, real-life TV show. And, given the longevity of their predecessors and their current good ratings in Vancouver’s music scene, hopefully there will be many renewed seasons to come for tv ugly.

UCLA Yankee Cola will be released by Vancouver’s Alarum Records on a to-be-announced date in September.