The Fringe Festival tends to favour comedy, and sketch favourites like The Pajama Men often overshadow some of the other genres being performed. Here are two less publicized plays that worked in a darker mode this Fringe season.

Drumheller
It takes a while for the plot of Drumheller to come together. The cleverly structured story, put together by Torontonian writer/actors Leah Bowen and Darcy Bruce, sees a pair of missionary Mormons, a blustery detective and secretary, and a sinisterly quiet elderly couple embroiled in a missing persons case. The script is complex, full of hysterical throwaway lines. In one rare moment of personal revelation, the secretary admits that she suffers from a disease that has left her bald, and after a brief silence the detective goes into a meditative rant on whether it would be difficult to attach false pubic hair, ending thoughtfully on the words, “Christmas wish list, Margo, Christmas wish list.”

The problem is that Bruce and Bowen don’t give the dialogue room to breathe, and the pace they’ve chosen is not varied enough to allow the audience to connect with the characters. There is also some unnecessary subplot; one of the Mormon missionaries, Sancho, turns out to have bluffed his faith to get to North America. This bit of character development feels gratuitous since it doesn’t influence the plot in any way, and it’s hard not to wonder if Sancho’s overly dramatic personal story hasn’t been created simply to give Bowen something fun to do. The most succesful characterization is that of the older couple, where the slower dialogue gives Bruce and Bowen an opportunity to create more fully realized physical performances.
Split Second

Mik Kuhlman can stand in a corner of the stage for five minutes putting on gloves, and you still want to watch her. In Split Second, Kuhlman pulls together two movement pieces—“Jackie”, and “No”— and two short stories—David James Duncan’s “Red Coats”, and the highlight of the play, Raymond Carver’s “Fat”— weaving them together into a subtle and resonant emotional event. Kuhlman plays the three-year-old child in “Red Coats” without preciousness, giving her character a wide-eyed determination as she climbs the enormous red coat hanging from the theatre’s ceiling. “Jackie” is an odd piece, done with a strobe light, about a car accident and the eternal reliving of the moment of the crash. “No” is another mime-based piece, and while it goes on perhaps a touch too long, it ends on a stunning note, with Kuhlman walking behind a sheet and interpolating herself into an image of the bus where Rosa Parks refused to stand up. It’s in “Fat,” however, that Kuhlman’s stage presence is most arresting. Her slow, relaxed pacing makes the moments of humour organic, and her waitress character’s mixture of strength and vulnerability brings a pathos to the story of a fat man eating in a restaurant that another performer might have missed. 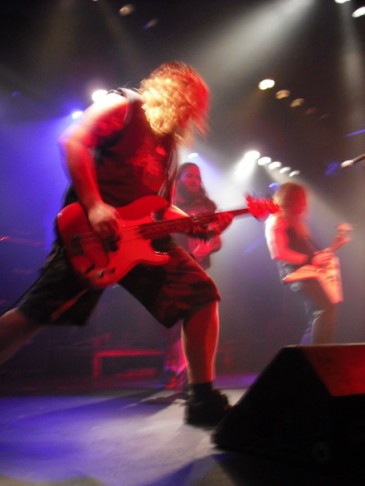