As we sit down at the Templeton’s counter, Tom Whalen recounts L. Ron Hubbard‘s sleeping rituals. Despite his stature, Hubbard made use of sleep therapy: self-help tapes would extol to him his capability, his masculinity, his sonorous voice — he loved to sing for collected friends. 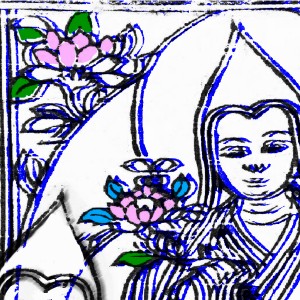 Whalen has many pseudonyms for many projects. Irrespective of this variegation our conversation returns to two threads: the entitlement of men — geek cultures, cults of personality, wherever — and the redemption of junk into art through creative processes.

Tom: “[Self-help] speaks to everyone. That’s why it’s so successful, it speaks to basic dreams, desires.”

Jon: “But what can be salvaged? Is it all junk?”

T: “No, you can learn a lot from it. Part of the creative process is salvaging, about trying to take something so despicable, like cults… and turn it into something good, or be productive about it. That’s what I try to do in all my art. Take something terrible, make a statement, even if the statement is ‘look at how horrible this is’… much like with performing, publicly humiliating myself as a male character…trying to take this thing from a lot of music with unwarranted affection from men, and take it up to this absurd level where it loses any serious notion and becomes this goof fest.”

Whalen’s commitment to the goof fest in all capacities is a moral imperative that supersedes cynicism as a critical approach, the privileged sneer of nihilistic irony. His latest guise, Tommy Tone, whose album Fax Me A Brain has just launched via premiere streaming website YouTube, is configured as a male effigy. 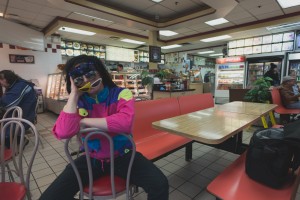 T: “[Tommy Tone is] the personification of desperation as opposed to the cool confident male … I wouldn’t want to put something out without a message. At my work they play a lot of soft rock, 70’s, 80’s.The male ballads have two categories. The Last Night: the lyrical content is like “one more time, before we say goodbye, I’ll never love you again,” just a dirtbag stereotypical male rejecting a woman after one night of crazy love. The other one is this crazy “I’m gonna love you to the end of time.” Like, totally unrealistic — they both are — but embarrassing: singing a song like that to any object of affection, how repulsed you’d be. You would become a part of the public embarrassment. I wanted to do this to emasculate myself, to take away my own guilt being a male. That’s what it is at the core, gender in a sense. My reservations with being a cisgendered male.”

Tommy Tone is not a joke. Fax Me A Brain’s press release extends beyond an absurd treatment of caricature, eliciting genuine pathos: “[Fax Me A Brain] catches a man in stasis, a wannabe tough guy with no confidence, paralyzed by his own self doubt.” On the track “Muscle Planet,” Tommy repeats the lines “I’m so strong I can eat the Earth and now I live in space.” It’s a tragic act of self-abjection and isolation: the failure of masculinity as a social construct. 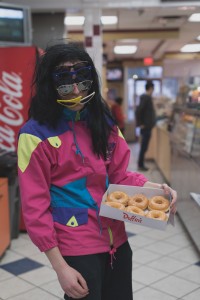 T: “I do feel uncomfortable about it being in vogue for cis white males to be baring their souls [in music].”

T: “Don’t even get me started. As if no one has done that before. I want at least some degree of separation. I don’t think I could do it as myself. I know how to project it easily to the audience, so they know the story. They’re in on it. All the stuff I like is really easy to get, but you can make it structured and multi-dimensional: something people can live in for a duration.”

As a conceptual artist, Whalen’s worlds often rupture: how an awry Youtube oddity ruptures your browsing session. Whalen’s Beastcon performance, playing CultureBeast CEO Kenneth LaMarr Jr., ended notoriously with a prolonged climax of Christmas carols complete with Santa Claus sharing duet duties, moving from comedy into an anti-comic exploration of the effusive. Tommy Tone is a farce, but Tommy Tone is also real: “If things are falling down that’s good. It’s all part of the experience, I want people to maybe think it’ll fall apart. And [consider] what does happen if it falls apart.”

Whalen’s array of comic conceits belies the conviction with which he talks in person: “I got informed in the past few years. I didn’t care about class, gender, how I was presenting myself. I started to think about it more, read more about it. I’m trying to do something that says something about gender norms and rituals. That’s where the public humiliation comes in.” The parody is good, but beyond the gag Whalen’s performances are evocative, like John Maus’ live flagellations. When Tommy throws himself into auto-excoriation on-stage, we are brought into the public embarrassment. That’s catharsis.

T: “I love karaoke. I love that everybody is a star. It’s so much truer to me than the concept of American Idol, or America’s Got Talent, because it’s happening in front of you. People are heroes.”

Tommy Tone’s next album will be “a very long cover of ‘Blinded by the Light,’ The Manfred Mann version, which is a cover of the Springsteen version.” Tommy Tone is also planning a musical about a haunted house. 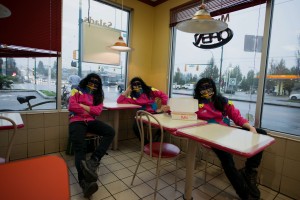