Last year, Christopher Nolan’s Interstellar launched with an explicit desire to bring space travel back into the popular imagination. Accordingly, leftist gadflies fell into formation. For socialist publication Jacobin, Eileen Jones contributed “Reactionaries in Space.” A quotable blurb from the article reads: “Interstellar celebrates American-style frontier expansion and retrograde masculinity. It’s an ideological monstrosity.” Personally, I took the opportunity to revisit Gil Scott Heron. Really, this criticism came to wit over four decades ago: “You know, the man just upped my rent last night / Cause Whitey’s on the moon / No hot water, no toilets, no lights / But Whitey’s on the moon.”

Local filmmaker Milena Salazar’s short-documentary Mars Barb opens with the titular Barbara Keith talking about her lifetime in Vancouver and the city’s consistent ranking as one of the most livable on Earth. This opening interview, shot during a typically dour Cascadian afternoon, might encourage jaded locals to ask “Most livable for whom?” Nonetheless, Keith — who has never left the city and was enamoured by moon landings as a child — envisions her only upwards movement as movement into space: a potential that the Mars One mission makes possible.

A quick primer: Mars One is a privately funded initiative to send four individuals on a one way trip to Mars to begin the establishment of a permanent colony. Keith is among the entrants to make it into the second stage of processing. Sequences of Keith engaging in physical labour — ”I live for my after-hours” — invite thoughts on the inequitable access to such projects, historically. Mars One is exciting because you don’t have to be a Yalie or Richard Branson to travel into space. The American Dream is fiction, but perhaps we can achieve the Transnational Dream (pending the approval of Mars One’s television production heads and corporate sponsors).

This is all to say that utopian visions are contestable. Mars Barb does not concern itself with a qualification of space travel. Its ten minute runtime documents the beautiful ideas that space travel conjure itself. And what’s more, that one of us could travel to Mars. There is audacious delight in that: a woman from Surrey finding herself Mars-bound! 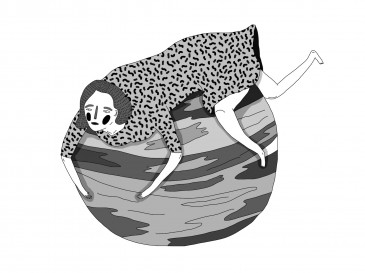 Keith is rightfully excited and engaging. As an advocate for the speculative impulse of space travel, she makes a great raconteur. For her, that inaugural moon landing lent humanity a source of constant optimism and aspiration.

The film relishes in this without much fanfare. The camera is content to linger, follow, or capture the familiar, from hazy proximities or odd angles. At times Mars Barb takes on the aspect of a high-concept home video, alternating between direct interview and shots of Keith’s day-to-day. Salazar’s other work shows a patient and inquisitive curiosity. There’s a link on her Vimeo to a short film Album, which explores people’s relationships to photographs and the worlds that those images conjure. Throughout Mars Barb, Keith looks at space through metaphors: brochures, Planetarium exhibits, and footage of the Apollo 13 landing.

In this sense the film loves to make us look — look closer, look at the ordinary until it becomes extraordinary, look at the tactile surface of this statue, or at this sunwashed scoreboard in Surrey. The film itself ends with a shot of someone looking through a telescope. Handicam shots follow the ground, trace Keith’s actions, allow us to read what she reads from behind her head. The camera takes us, with Keith, to a running track, a cosmic roller rink, to a field of grass touched with particles of frost, unearthing an alien vibrancy in the everyday.

During that sequence on the track, Keith explains her workout routine. She claims the red running track she trains on will better acclimate her to Mars’ red surface. And she describes the feeling of serenity one attains after hours of running, becoming “at peace with the universe.” There’s something to be said for the valorization of the everyday:finding Mars on Earth. Salazar’s strength with close attention manifests in the uncanny and often gorgeous capture of ordinary scenes. Here in Vancouver, with glistening towers reiterating the question — “Most livable for whom?” — we could afford taking a brief respite from looking skywards.