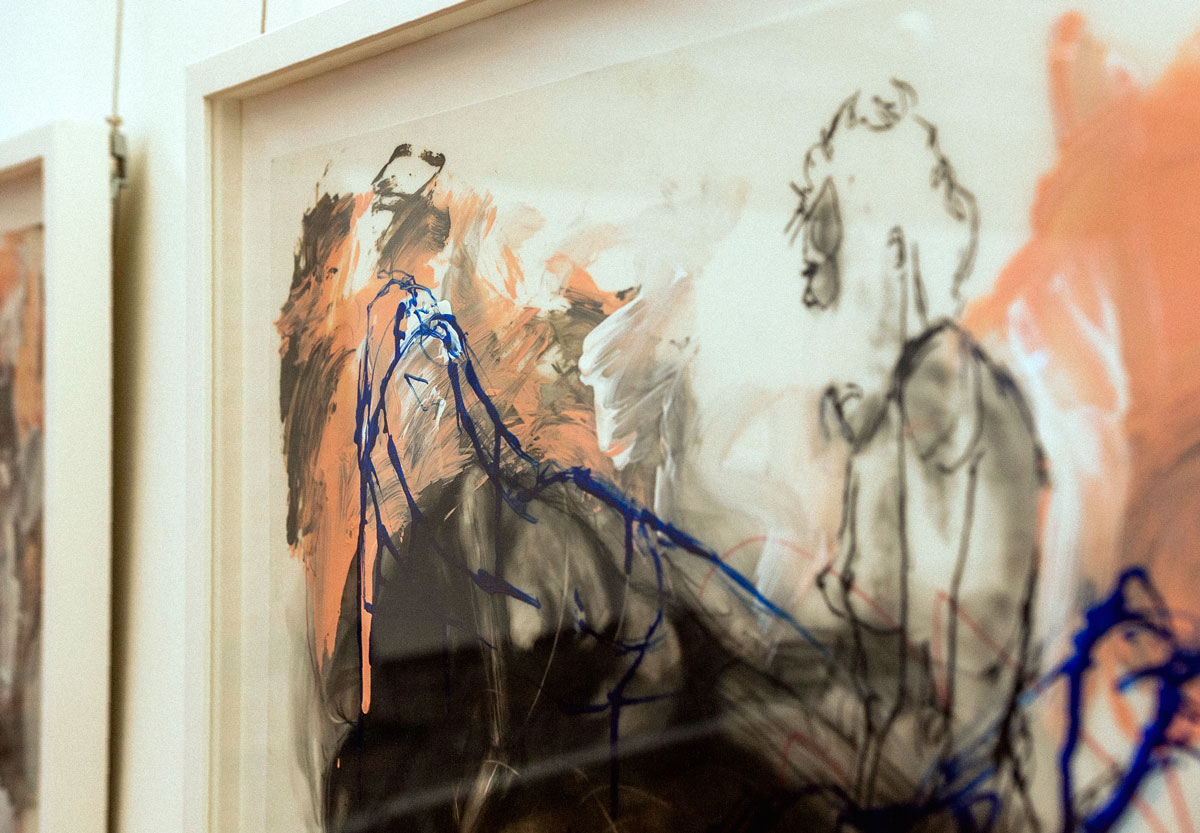 In the heart of Chinatown, sandwiched between two narrow and towering apartment blocks is the wide-windowed E 23rd Pender Street. Of all its street-level neighbors, the Massy Arts Gallery is the neighborhood sun-catcher. Before even entering, I notice its gleaming white walls and bare interiors entrap the day’s dwindling sunlight. I’m greeted by Rafael, gallery overseer, who leaves me to my own devices fairly promptly with a courteous smile.

The exhibition is minimalist; 4 walls make a canvas for the 4 artists to use as their blank space. The Hybrid Machine by Pippa Cherniavsky, Dennis Humphrey, Alisha Sian and Nicholas Tay is a group exhibition which  uses figurative expressions as a reflection of Donna Haraway’s A Cyborg Manifesto (1985). This essay blew up as a primordial piece of writing in cyborg theory as one of the first of its kind, regarding human-cybernetic selves as a post-human phenomenon. Haraway, ahead of her time, pressed that cyborgs are an eerie mix of our imagination and actual realities, and that we are all merging into bionic-otherness. The exhibition, an echo of Haraway’s piece, practically ridicules the cleavages we kid ourselves into believing are between the technological and the biological — of ourselves versus the other, and (in Harroway’s words) between the ‘anthropocentric male’ and the ‘disposable category of the fe(male)’. 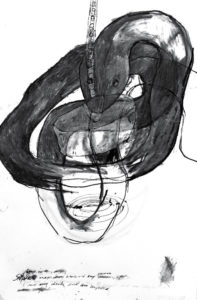 And indeed, the exhibition is harmoniously eerie. Lusciously glazed floorboards and their particularly vocal foundations emphasize that my footsteps are the sole visitors of the room, so that the hanging artwork is subject only to my lucky eyes for inspection. Sian, the artist to the far left of the room, displays pencil and paper art of bodily anatomy with a robotic rendition. Playing with the curvature of lines and the flexibility of circles, Sian keeps her shapes digestible and easy on the eye by containing an almost arithmetic feel to her drawings, with a sci-fi twist. In her piece Make Space for Her, an otherwise palatable portrait of a woman distinguished, again, only through curved lines and spherical variations presents itself with a bulbous third eye in place of a forehead. Striking me as a real life Leela from Futurama, I enjoy this fantastical depiction. Elsewhere, a penciled hand coils in on itself in a bot-like manner; angles sharper than the hand of a human might be, finger-joints disproportionately large, as though a nut-and-bolt mechanism may be hiding under the skin instead of our usual phalangeal joints. Sian fuels an internal series of ‘what-ifs,’ regarding human-engineering fusion in ways that tickle my curiosity more than anything else. These works satisfied a need for the tangible and un-abstracted. They were  an eccentric take on cyborg superficialities. Here, I’m content — nothing of particular threat looms over her sentiment; imaginable in a young-adult sci-fi film, Sian’s work locates a distant human truth with recognizable  and calculated strokes and a soft, monochrome tone.

This is not the case in the works of Tay and Cherniavsky. If oil pastel could slap you silly, that’s exactly what it did; both of their works left me in a humbled daze.  Flickering through their displays, it seemed I was forgetting how to connect limbs to brain; how to use eyes as visionary tools.  Both collections prized out my internal definition of identity, threw it onto the wooden floor and stomped all over it. In its place became this solemn sense of floatiness —  where anything I thought I knew about my metaphysical form was questioned. These portrayals are considerably more explicit than Sian’s. Tay’s mediums are acrylic and contè on mylar, the latter of which works as illusionary — great in layering pieces. His works depict with a woman’s naked body sprawled and fatigued on the floor as a primary base layer in blackish-grey conte, but her being transcends throughout the four pieces into a genderless form, done with drip-dried paint in  soft pinks and whites. As the images progress, the body on the floor becomes less ‘there,’ and loose limbs appear under the brushstrokes. Ultimately, a faint, bearded profile with breasts is apparent, although very discreetly so. Lifelessness overruled by a transient new presence assists Tay’s aim to detach ourselves from what we think we can define identity by. Tay’s work, coupled with the peculiarity of having an entire exhibition to relish alone, felt like an obnoxious silence in my head. The simplicity of the message, married with such abstract and overlaid imagery created a sense of pixellated  white noise swirls around my mind. I want to talk to the paintings, to understand its choice of  colours, to know what ‘woman’ and ‘man’ represent here – if they signify anything. But more importantly, to dissect the last image which portrays a newfound energy in the figure, after such persistent lifelessness. The dark, charcoal backdrop indicates a tiredness, a kind of stillness too. The exhibition begins to veer away from dark shadows and interpretive blurs at this point. Cherniavsky introduces more colour into her work, and her paintings depict an increasingly staggered nature-scenic with less of a storytelling goal. Rather, she draws snakes writhing around a human heart, or a giant pair of gloves floating above a city skyline. She definitely initiates a tendency of ‘out-of-placedness’ in today’s world, and I particularly felt she might have been working with themes of negative externalities. Warping what we define as our bodies, through depicting both physical and psychological barriers. . She explains that she relies on her awareness of her own body and limbs — asking herself ‘how heavy/strong does my ribcage feel today? What do my forearms feel/smell like/sound like today?’ as an indicator for starting a new piece of work. Her forms, similarly to those of Tay’s, invited me to feel beyond the body as  if it were only a set of organs gift-wrapped in plenty of skin tissue, and rather, to tune into what it might mean to actually understand our operating, cause-and-effect selves. Whilst Tay’s work left me searching for meaning, Cherniavsky rendered me keener to turn to a much more personal-awareness exercise. 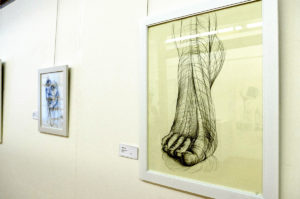 The last work displayed was Humphrey’s, which was a great way to come full circle with the Donna Haraway theme. Much like Sian, Humphrey’s rhetoric is blatant — we have become robots. In his piece Portal to Simulacrum, a dull-gold humanoid robot looks into the mirror, impressively expressionless. A frail line for a mouth and an impeccably balancing brow-line breaks up the otherwise smooth metallic figure. The artist explains in an annotation adjacent to the piece that the robot is named Andros, and is a kin inhabitant of Terras Verde (Green Earth), but today the planet is overcrowded and kins are outcasted. So, these kins search for life on alternate galaxies, leaving non-kins to face self-inflicted repercussions. Toying with concepts a little too close to home, Humphreys successfully associates us with a form usually not associable to press the urgencies of life forms on Earth.

Humphrey cleverly portrays the humanoid looking into the mirror so that its reflective gaze stares right back at the viewer. I can’t  quite shake the eerie feel which perched itself onto my shoulder the second I walked into the exhibition — but it’s become comfortable. There are aspects to the bot that I’m drawn to; its’s androgynous, it can self-replicate (hm, might not help with overcrowding), and it is made of chromatophores which scan, absorb and reflect its surrounding environments, rendering the bot entirely, debatably obtrusively dependent on its immediate environment for ‘survival’. One last time, we ask ourselves about identity, and I wholeheartedly conclude that my ‘self’ is simultaneously more and less than I  might initally make of it. Identity is fluid and alters as our environments change — especially as externalities such as cybernetics enter the scene. Yet, The Hybrid Machine catalyzed a discovery for me which sort of works in reverse to its pretence of nature and environment as always being the formation of our identity; and rather our identity and its solidity being indispensable in the continuous functioning of non-human entities on all extremities. A catch-22 of dependency and independence. 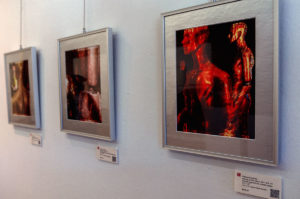 I leave the exhibition a lighter being. I feel that my head is a big light-absorbing chloroplast, taking in and seeking to understand Haraway’s take on the ‘self’, as well as Chinatown’s late afternoon sunbursts. I’m very much still grappling with what on Earth this ‘self’ is, and I can thank Massy Arts for catapulting me into a curious and blissful abyss. I reckon this utter confoundedness is a right-of-passage in the unending discovery of identity and culture in a world of cyborgian and imagined realities, in  human ontology and known physical truths. 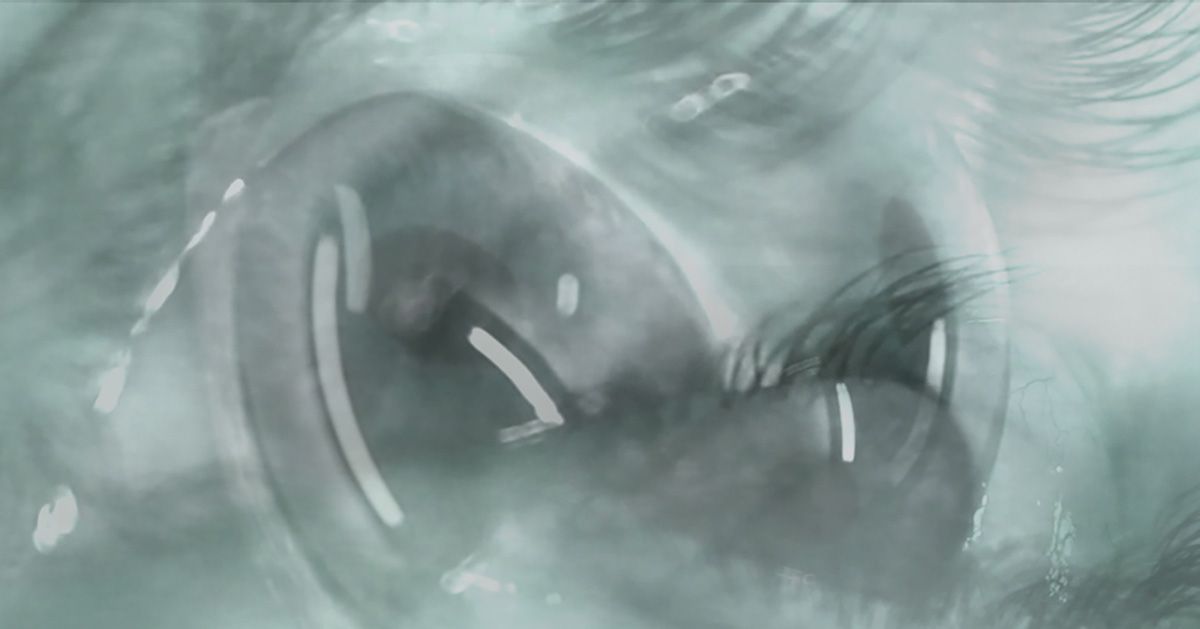 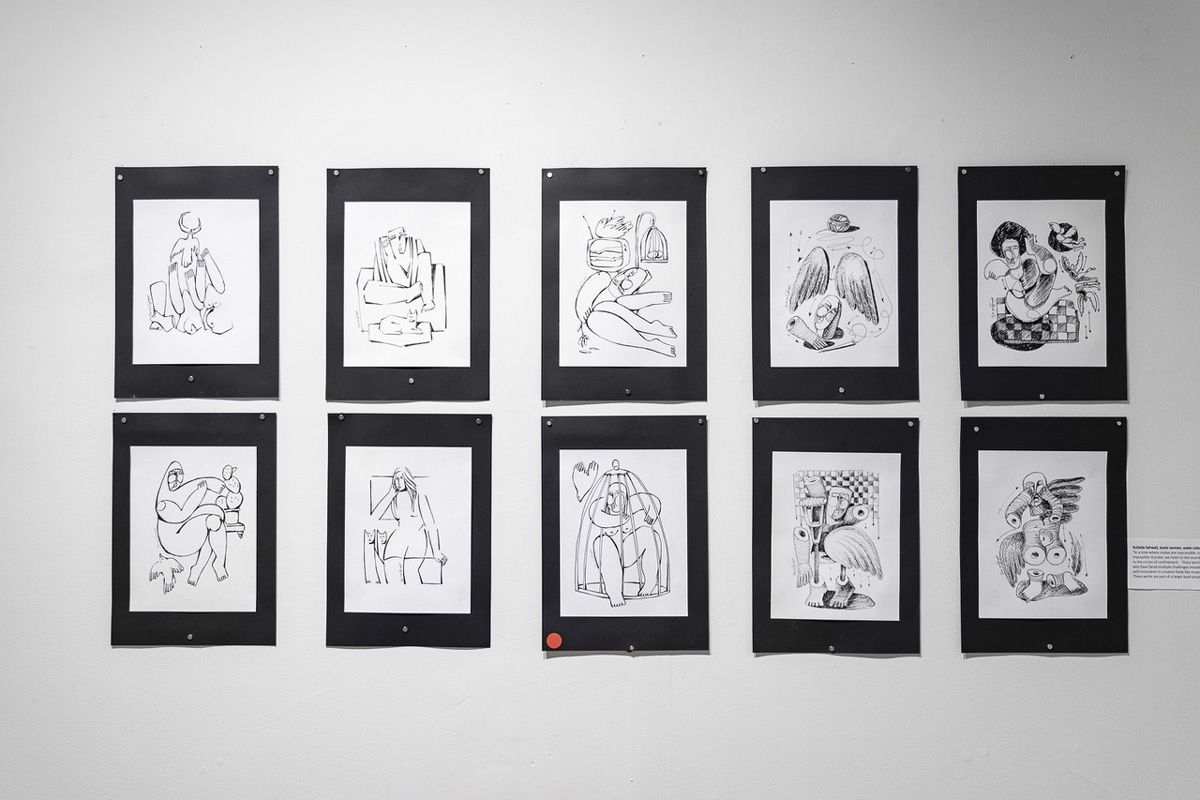