I arrive at an industrial back alley door next to a busy Clark Drive. In between workshop garages and bikes, hardcore quartet Keep Tidy — Shmoo Tidy (vocals), Kyle Huck (guitar), Brett Threats (bass), and Dustin Bromley (drums) — lead me into their newly acquired noise chamber on Clark and 2nd to share some wisdom. In a room crammed with tons of gear and three drum sets, I move an oversize plastic ice cream cone to sit down and chat about their jam space.

Discorder: Last time I met you all, you had a jam space on Abbot and Hastings. When did you move here?

Dustin Bromley: December? Or was it November?

So you stayed in that space until you moved here?

DB: Yeah, I rented that room for six years, so if I have any permanent respiratory problems that would be why.

Brett Threats: That is why we named the first Keep tidy EP Basement Mold.

DB: So many bands we know had rooms in that space like…

BT: The Jolts where playing there for a bit, White Lung, Bessy, Sun Wizard.

DB: It was a moldy shit-hole. It was called whatever people wanted to call it. Everyone had different names for it, but all names had something to do with mold.

How is this place different? Is it in a good or bad way?

ST: We are not a block and a half away from a liquor store or 7/11 anymore.

Kyle Huck: Nobody bums smokes off you here though.

BT: We are closer to our houses.

ST: Yeah, closer to home. We can sit in the parking lot and drink here without worrying about the cops.

ST: It’s not roomier. It’s a bit smaller than the old one, but I like it better.

DB: It’s kind of the same, but the atmosphere is better. Hanging around outside and seeing all the other bands because there are three sections [here] that are all full of jam spaces … From a renters perspective, these landlords are amazing.

Does the writing process happen in the space? Is it intense and to the point, like your songs?

DB: Just after we wrote the second EP Budsbuds, we tried to evolve the sound a bit. I think we tried adding too many parts to the songs, and we didn’t finish a song for like six months because we just …

BT: Over thought it.

DB: We were over-thinking way too much and then we …

ST: Came back to our roots.

DB: We realized what we are: just a simple hardcore band.

BT: Just three parts, for every song. That’s it. That is all it needs to be.

BT: Yeah sometimes two! Most of the songs just have two parts now I guess. We got rid of the third part all together.

So last question, how does the group dynamic come together in rehearsal compared to playing live? Who takes up the most space?

KH: Brett! Brett! I can’t invade his zone. He’s got a bubble, live and in rehearsals. I am not allowed near him. Sometimes at practice I try to get a little closer, just to see how close I can get.

BT: If we’re live, having two people on one side always looks super awkward to me. Kyle keeps following me though, just because he knows it bugs me.

Keep Tidy play their first show in nearly six months on May 24 at Zoo Zhop. For more tunes, visit keeptidy.bandcamp.com. Their shit is free! 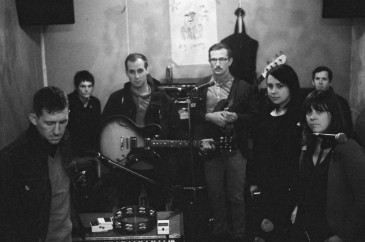