I grew up on a varied musical diet: Zorba The Greek, country, folk and lots of classical.  Waking up to Gordon Lightfoot’s “Alberta Bound” is a happy childhood memory. My three sisters and I had free range to flip through the stacks of records and our parents didn’t mind us roller-skating around the living room to songs at high volume. We had sisal carpets — scratchy if you fell, but we never did.

In Grade 10 at Balmoral Junior High in North Van in 1976, I took guitar. Our patient music teacher, Miss Christiansen, taught us massed on risers in the music room. It was fun and inspiring, and for me, it led to classical guitar, then later at UBC to a string of original bands. 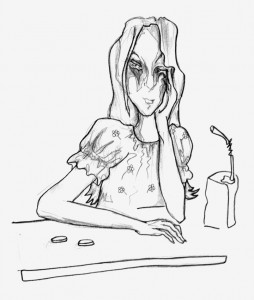 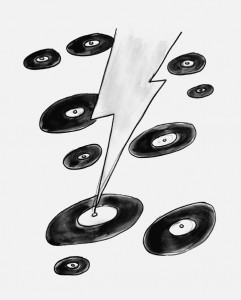 That same year the English teacher, Mr. Paynter, a gentle rugby-playing giant who kept our boisterous class in line with humour and an enlightened sense of humanity, sponsored a small radio club. It was me, and the cool guys who knew about rock. KISS was very big then and four members of our radio club were Balmoral’s garrison of the Kiss Army. Steve, Kevin, Scott and Nigel had presence. They were big, tall and dressed routinely in black leather jackets, platform boots and band tees. They called each other only by their last names. The four of them strode abreast down the hallway like they owned the school. But they were all nice guys, just more confident in their musical styles and tastes than the rest of us.

The radio club set up was simple: in the school office was a record player, the desk microphone and PA used for making announcements. You put on a record (for example, Van Cliburn’s legendary piano performance of Mozart’s “Rondo A la Turka,” the first classical record I ever owned), and then you would talk about it before dropping the needle into the groove. I called my show “Classical Gas,” starting it off with Mason Williams’ unlikely guitar hit by the same name. It was all classical music, which made my show unique — the others were playing contemporary material.

The others in the radio club had been exposed to actual pop music. I had only ever heard it at school dances, where local bands played Top 40 covers. I remember thinking in Grade 9 what an awesome band we had gotten for our school dance, with two songs I especially liked: “Fox On The Run” and “Smoke On The Water.” I had no idea these were not their own songs, and thought it routine that our school would host musicians with such excellent repertoire. The Sweet and Deep Purple… if only.

Some Fridays there was lunchtime entertainment in the gym. One of these Fridays was a band called Burnt Toast thrown together by several of the Kiss Army guys including Steve Robertson and Kevin Crompton in radio club. I don’t recall the songs so much as their images and attitudes — exciting, loud and confident with a sly wink. You could call it proto-punk-rock, though we had not yet heard it named.
In the bleachers we cheered and stomped for more, and even the teachers smiled at the showmanship. In a trajectory that blazed from KISS and Rush fandom, to Burnt Toast and beyond, Kevin (now cEvin Key) grabbed the brass ring as a founding member of seminal Vancouver industrial band, Skinny Puppy. Steve went on to become a popular CiTR DJ (most notably, for Soul Galore with his co-host Anne Devine [now Anne Robertson]) and CiTR President from 1983 to 84. Steve also replaced Jazbo on bass for the Actionauts in the later part of their music-making.

While at UBC, I was often at CiTR, an environment that fosters and encourages local bands. That early support and the amazing people I met at CiTR led to further musical adventures in bands that charted: The Dilettantes with “Dunkel Augen,” “Gregory’s Girl,” and “Turn Away,” and The Hip Type with “Illumination,” “Mary Baby,” and “Bluebottle Flies.” But that’s another story…