Baltic
Does it bother anyone else that the Commodore is now showing movie trailers and ads in between bands? More power to them for finding a way to make extra money, but it didn’t sit right with me. Anyway, on to the topic at hand. I don’t need to tell you that Wintersleep put on a great show. Before I say anything about them, it’s worth mentioning that their opening bands were also excellent, each one shaking the Commodore floor like nobody’s business. Listening Party from Shawnigan Lake, B.C. proved that there’s nothing like a good male group harmony. Their gruff manly voices intertwined beautifully over pounding African-inspired drum beats. The song “Pachina” from their last album Who Are We Missing got big cheers, and most of the audience joined the chorus. “We usually just play in damp caves in the wilderness,” said the bass player, who introduced himself as Terry. I predict that this group will soon be leaving the caves and selling out venues like the Commodore as headliners.

Syracuse, N.Y.’s own Ra Ra Riot came onstage looking like grown-up cast members from Superbad with their messy mushroom cuts. They launched straight into their newest single, “Boy.” The band were spread out across the stage, but they all moved together, jumping and bobbing up and down in time with the beat. They rocked so hard that bassist Mathieu Santos could be seen shaking sweat out of his glasses between songs. What makes this band stand out from the crowd are the ladies on cello and violin, so it was a shame that the live mix was a bit muddy. Regardless, the music soared with its characteristic grace and power while maintaining the frantic momentum of drums and bass. The tall blonde violinist, Rebecca Zeller, stood aloof and concentrating, but tiny cellist Alexandra Lawn, barely the same height as her instrument, was headbanging her way through the whole set. At one point she went up to the mic to sing a song, revealing a surprisingly smoky, sultry voice. There was a momentary hiccup with the sound right in the middle of her solo, but she and the rest of the band quickly recovered. They finished up by politely thanking their hosts, Wintersleep, and announced that they would be returning to the Commodore on Jan. 29.

As the movie trailers played, people in front of the stage began lighting up their tobacco alternatives for the headliners. It was less wild and more friendly up at the front than at most shows I’ve seen, but a few guys did put in the effort to start a mini mosh pit once the band got started. There was singing along and syncopated hand-clapping, led by guitarist Tim D’eon waving a Kermit the Frog doll. Wintersleep’s live sound unexpectedly reminded me of the Tragically Hip, with singer Paul Murphy’s voice ringing out higher and slightly more nasal than it sounds on the radio. Part of it might have been the fact that their usual layered, echoing backing vocals were missing. The audience often remedied this by singing backups and Murphy seemed amused, faking us out by changing up his timing on “Weighty Ghost.” Honestly, it’s good to see that the band can keep things interesting, even with the big hits that could easily get very monotonous to play. They didn’t keep the audience waiting too long after leaving the stage at the end to deliver a very generous encore. If you get another chance to see them, I strongly recommend that you do it! 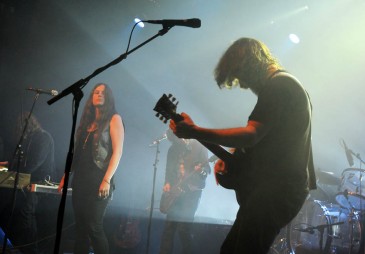 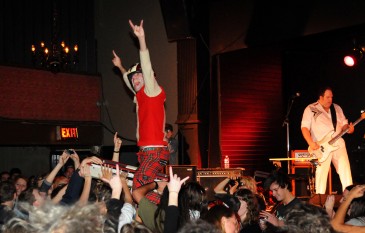