Now another tomb in Vancouver’s cultural graveyard, art lovers will always remember where they were when they first heard that the Waldorf Hotel was closing.

Or maybe they won’t. The city’s slaughter of culture hubs is so bloody that the Waldorf is only one grave among many. The Granville 7, the Ridge, the Hollywood, the Vancouver Playhouse Theatre Company, W2, and many other art venues and enterprises welcome the Waldorf to Donnellyville, a suburb of Whyhaven’twemovedto-Montrealyet.

Earning its keep along an economically dusty stretch of East Hastings, the Waldorf Hotel first opened in 1947. Polynesian tiki bar and all, this venue eventually fell victim to urban decay. As the city’s center shifted west, the Waldorf Hotel became just another eastside dive bar. Until it was reimagined.

In the summer of 2010, a 15-year lease was signed by an assembly of partners headed by Thomas Anselmi, Ernesto Gomez, Scott Cohen, and Daniel Fazio. After investing a total of $1.6 million into the hotel’s restoration, it reopened on October 31, 2010, as a Downtown Eastside cultural institution.

According to a January 13 press release by Waldorf Productions, “The team at the Waldorf created a community-driven and financially viable business that was thriving.” The project hosted concerts, art shows, and community events like the food cart festival, while also running a prosperous restaurant. Despite such successes, during the Waldorf’s first year, earning enough to pay rent was a challenge.

Empathetic to their adversity at first, landlord Marko Puharich later abandoned sentimentality and chose to sell the hotel. It was put on the market last August and sold early this month to a Delta-based condominium developer, the Solterra Group. As Discorder goes to print, the City Council had approved a 120-day protection order for the site and CEO of the Solterra Group, Gerry Nichele has commented that the company has “no intention of demolishing the Waldorf Hotel” and that they would like to work with the city to “improve the hotel.”

Reactions to this closure have amassed as an army of statements, articles, and emotions. Living in Vancouver is now, more than ever, subject to scrutiny. Discussing rent, both for living and art spaces, Douglas Coupland surmises, “Everyone knows it’s getting too expensive for a creative class to live here any longer.” Reviewing the city’s cultural climate, Mayor Gregor Robertson laments, “The Waldorf closing is a big loss to our growing creative community.” Protesting art’s diminishing value, an online petition calls for the Solterra Group to allow Waldorf Productions to continue operating at the Waldorf under a fair lease agreement. Upwards of 21,700 people have already given their names to #savethewaldorf.

It is a shaking finger that points to the source of gentrification and art abatement. There are grounds to vilify many forces; our federal government’s dismal art funding, our city’s weak zoning laws, self-serving foreign investment, high-rent condo development, and our own pathetic efforts to pull out our pocketbooks for local culture. Maybe there isn’t any one solution to saving Vancouver’s art scene. Maybe places like the Waldorf will keep closing. But there is solace in foreclosure, and that solace is art.

Art itself cannot be torn down or pushed out or destroyed. The creative minds that filled the Waldorf have only been displaced. Finding a similar venue will likely be a struggle, though in a way, that makes the cause more precious. In a way, art’s beauty is its absolute difference from the avarice and materialism and insecurity that fills so much of our lives. Without these crude realities, art would have little to contrast with and rebel against. Ironically, it is the existence of such greedy forces that first inspired the Waldorf’s opening and have now closed its doors.

Rather than spinning hopelessness, this cycle offers promise to all those Vancouverites with heads hung low. The Waldorf’s closure is a great loss, but is a realistic result of market forces. Let us be inspired by the bleakness it offers and use that pain creatively. The Waldorf Productions team and all their collaborating artists will find somewhere to continue their creativity. Be it living rooms, sidewalks, parks, workplaces; art is wherever we put it. 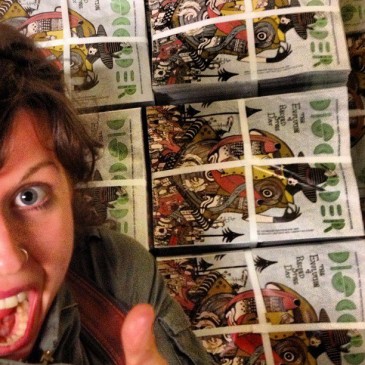