After a month of growing pains it seemed like an excellent time for us to get in touch and see how the new 1,000 person Rickshaw Theatre was dealing with things.

“We tried to do a very soft opening,” Malice Liveit said on the phone while he took a break from installing a new lighting system that had been purchased from Richard’s on Richards.
Although he had not originally wanted to open the new venue until September, he thought it was necessary to open to provide a space after venues such as Richard’s closed down and the Cobalt was served with an eviction notice.

Situated at 254 East Hastings, the venue is currently hosting a few shows a week while it continues to undergo renovations. By September, Liveit expects the outside of the theatre to be redone with a neon sign with the venue’s name in both English and Chinese, thanks in part to funding from the city, which is encouraging neon signs to return to certain areas of Vancouver.

The Rickshaw is in the heart of the DTES, but Liveit isn’t worried that the location will be a problem.

“There are people who think it’s going to be harder to sell the room,” Liveit said. “But really there’s no problems in the neighbourhood.”

Liveit pointed out that despite the neighbourhood being a bit rough, worried parents can drive right up to the entrance of the building and drop their kids off for all-ages shows and then the Rickshaw staff will keep an eye on things.

Being situated in the DTES offers the theatre a bit of an advantage, as it is conveniently located for the artists that Liveit wants to perform there.

“Most of the real art and music coming out of this city is from the Downtown Eastside,” Liveit said. “So they’re here already.”

Those local artists might have a bit of trouble filling the large venue to capacity, but Liveit plans on subsidizing local shows with more lucrative big name shows. He’s excited that he’s been able to announce that Pink Mountaintops and Skinny Puppy have booked shows in the upcoming months. Liveit said that both the Japandroids’ and Jaws’ shows had approximately 600 people in attendance and he expects to sell out at least one concert before October.

Though he dreams of setting up a curtain that can drop down halfway through the room for smaller shows, Liveit is taking things slowly. As far as liquor sales go, the Rickshaw is still being run as a test case by the city with extra red tape for every event—but hopefully that won’t be for too much longer.

Meanwhile, Wendy13, manager of the Cobalt, was given an eviction notice by her landlords on July 31. The eviction is set for Sept. 30 and is reportedly in order for the Cobalt—the venue she runs devoted to punk, hardcore and metal—to be renovated for soundproofing.
The eviction was given without notice in the middle of a concert. Wendy13 said it was originally because owners claimed she was underusing her liquor license, though the owners now say it’s for sound renovations. The building is owned by the Sahota family who also run numerous other Downtown Eastside locations, including the Balmoral and the Astoria.

Wendy13 has been running the Cobalt for three years and has been an employee since 2000. She hopes that she will be allowed to keep the bar and venue open until Dec. 1. December and January are typically slower months for the business so she hopes to do the necessary renovations then and continue to run the Cobalt afterwards.

“I would love to stay at the Cobalt,” she said, “I love the Cobalt so much.”

Wendy13 said that conversations with the city had indicated that city staff did not require the building to be soundproofed this quickly and would not need work to begin as early as the date of her currently scheduled eviction, Sept. 30.

Lucia Cumerlato, who works at Licenses & Inspections for Vancouver city hall, spoke to Wendy13 regarding the Cobalt’s soundproofing. Cumerlato said that the city would like the work to be done “as soon as possible” but would be willing to make allowances depending on the situation. The city is currently waiting to hear from the Cobalt’s owners before making any decisions. 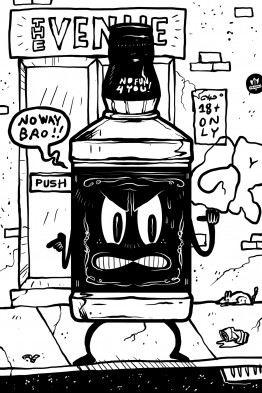