“We’re fucking little bitches. And we don’t do dishes! No we don’t! Do! Dishes!” rasps Maxine Michelene, fame hungry, just this side of haggard, swaggering frontwoman. Her polar opposite, the reserved, aloof and wise Fanta Geiger is perfect on lead guitar. Pint-sized skater, wary romantic and culinary whiz, Squeaky Laducer slams the drums. Fucked up hot chick Kitty Domingo pulsates the bass imperfectly, impulsively and with heart. These are four of the Five Little Bitches. This is Wet Leather.

“Every character has an aspect of my personality. Especially the unlikable ones,” says author Teresa McWhirter via email. Her characters are refreshing: not everyone is a hero, but her portraits are multi-faceted and entertaining, drawing empathy, if not sympathy. McWhirter’s best sketching is in the characters “bios,” the type you find in glossy rock mags. What she does with a few words is impressive. For example, Maxine’s interests include musicals and gangbangs, and her first memory is a of wine commercial. What more do you need to know? The bios don’t just tell us facts, they tell us about how the characters want to be seen; a subtle, yet important, distinction to make in a story that dwells on fame.

The novel’s best feature is its entertainment value, with quick movements between narrative styles—biography, rock questionnaire, tour diary, confession — without being preoccupied with form. One of my favourite parts was the tour diary section, which highlighted what pushing very different but equally passionate personalities — not to mention women, not to mention punks — into a confined space can do. McWhirter’s descriptions of the distinct physical, cultural and audience landscapes around the world are authentic.

“I’ve been on the road many times with the Real McKenzies, who are close friends, so all the tour dates in the novel are places I’ve been. And the beautiful thing I’ve found is that a punk rocker in Missouri is pretty much the same punk in Serbia or Saskatchewan.”

Yes, the shows, the drugs, the booze, the fun, the strain all seemed authentic, but I’m not a punk by any means, so I asked affable CiTR punk fan Tim B., host of We All Fall Down, what he thought about the book.

“I think punk rock has many different sides. I’m personally more interested in the musical side of things, but there is a cultural aspect of punk that is full of sex, drugs, perplexity and life on the streets. This book is about that side of punk. This book is for the readers who are interested in people who live that punk rock life: their ups and downs, their highs and lows. And there are some exciting highs and pretty scary lows.”

East Van is the ladies’ home, sanctuary, trap and playground. There are some great, “Hey, I know that place!” moments. While the time frame is never distinctly established, some eagle eyes will piece things together, which might leave the reader with one question: does the punk McWhirter lovingly details that still exist in Vancouver?

“That scene has long died away. Now skateboarders are jocks and the music has been grossly commercialized and packaged for the masses. Punk rock will always live on in the underbelly of Vancouver, but to me it’s a term that defines the spirit of rebellion and ingenuity that is true nonconformity.”

And no. She doesn’t do dishes. 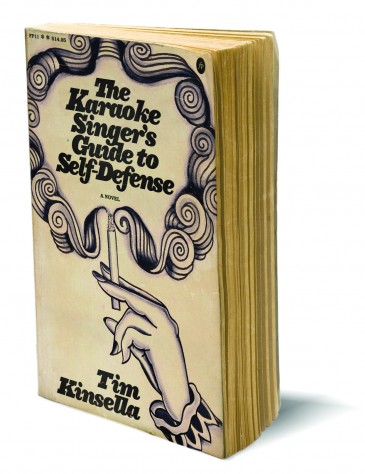