When the Pixies reunited in 2004, they were more popular than they had ever been during their original career. The tour, cheekily entitled “The Pixies Sell Out,” garnered far more media attention than any of their albums did upon release. Steven Cantor and Matthew Galkin’s documentary loudQUIETloud: A Film about the Pixies follows the band through their sold-out reunion. The band’s performances, rehearsals, and post-break-up lives are in clear view for the first time, more or less free from the weirdness and obscurity that was ironically always a part of the band’s appeal. The most interesting and entertaining aspect of the documentary is, naturally, the performances. Viewers are given insight into why the Pixies remained a good live act, as the band proves to each city they play that the tour was worthy of the hype.

Cantor and Galkin are good at giving titles. Capitalization too, believe it or not. The film’s title is both a comment on the band’s famous drastic dynamic changes (that probably appear more frequently in Pixies reviews than in Pixies songs) and the fact that, since the band’s formation, it has spent more time broken up than together. Though the word “quiet” may only have been caps-locked to denote the brevity of their career and the length of their break-up, it nonetheless deserves the same treatment when used with regards to their music. I say this not because I consider the Pixies a particularly quiet band, but because it was through the tense, quiet verses that the Pixies’ live show was able to transcend an eleven-year break-up.

Watching the band hang out backstage is simply uncomfortable. There is none of the playfulness you might expect from a group of people who played “Debaser” together. What you see is a lot of the tension you might expect from a group of people who broke up because they couldn’t agree on anything. As bassist Kim Deal’s sister Kelly points out, they don’t even speak to each other. It’s not hard to speculate that relationships this bad helped make for the fragile, lurching interplay heard in the softer moments of songs like “Caribou” and “Tame”. It is likewise almost impossible to imagine any “friends first, band-mates second” group pulling off these songs with such warped energy, especially after a decade-long breakup. Whether or not there is a connection, both the personal and musical tensions of the Pixies’ first seven years are essentially intact on loudQUIETloud.

There is remarkable consistency in the performances, but there are still highlights. The live rendition of “Caribou” (filmed at the Commodore) is no less eerie than the song’s original release on Come On Pilgrim, and the vocals of “Cactus” haven’t lost any of the pain they shared on Surfer Rosa. “U-Mass” is also extremely strong, proving that although the softer moments made the tour, the band still has a dynamic range. Frank Black’s sarcastic yelps can still make a jaded college student smile, and Joey Santiago’s lead guitar can still serve as one of the harshest white noisemakers you’ve ever heard.

Purists can complain all they want that the tour was nothing more than the Pixies’ tribute to their former selves, but although the band inevitably did put on a more intense show in the 80s, it’s hard to argue that the tour wasn’t worthwhile for fans. A more legitimate complaint would be with the DVD itself. For although it has great performance footage and is perhaps the closest you’ll get to the band without the help of YouTube, it definitely isn’t as consistently exciting as the shows themselves. Watching a group of people sit around and refuse to talk to each other is not something that most people are going to want to do more than twice, no matter what can be learned from it.

Finally, loudQUIETloud forces the viewer to re-assess their attitude towards reunion tours. It is totally possible for an older band to put on a great show, regardless of their motives. This is definitely something to think about as acts like Dinosaur Jr., Sebadoh, and the Zombies get back together. As for the Pixies, we’ve been reminded of their importance, and loudQUIETloud is a worthwhile souvenir for fans. 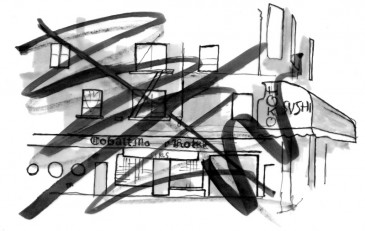