Together we make up the Discorder editorial masthead, including Under Review Editor, Real Live Action Editor, and, for April at least, co-Editors-In-Chief!

I just gotta say it one last time: Our past Editor-In-Chief was great. We’ll miss you Jacey!

So, now we’ve got one issue. How to make a splash in an era when print media is pushing up origami daisies?

To give you an idea: we’re interested in the intersection of art, culture, and criticism. What does that mean? Well, we’ll be showcasing what the present Vancouver arts and music scene has to offer and we’re going to show you what’s awesome — and, in rare cases, what we think might not be so awesome.

Ok, so how is that really different?

In our search to determine whether criticism is a reaction to creation, or vice-versa, we have sought out the role of art in criticism and criticism in art. All of this, of course, taking place through the lens of our favourite medium: music.

This issue is an extension of the changing cultural landscape that comes with an evolving artistic community that thrives not only on its internal community, but also from external criticism.

How do we gain access to this knowledge, and, an even greater question, who controls the dissemination of it? Where is music criticism headed, and why should we care?

As you might expect, we’re using this magazine as a shared voice. So, sometimes we may not agree (and you’ll know it) and other times we’ll be gripped in pig-headed enthusiasm (and that will be obvious too), but most of all we’re showcasing an extension of our ideas and ongoing discourses, not regurgitating press releases. So we hope you enjoy! 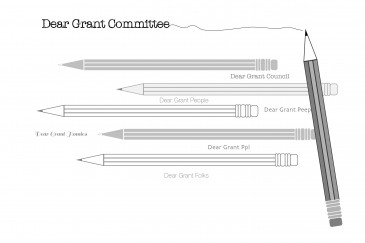 Building on what Rob has said, I would like to segue into an anecdote:

I recently spoke with a musician whose band was reviewed in Discorder last summer. The band was written about in our Real Live Action section, and not so flatteringly either. The review wasn’t by any means brutal, but it was critical. It critiqued the band’s rhythm section as being inadequate.

Knowing both the writer and the musician, I got both sides of the story. The musician explained that the review was hurtful, and served to undercut his confidence, hindering future performances.

He explained that in a small music community, where artists are trying to gain the courage to take risks, it serves no one to have unsupportive music critics. At first this made sense to me. Being creative is a process of screwing up, a back and forth between mediocrity and pushing beyond that. Essentially, being an artist is learning to be vulnerable, and that lesson is much more easily absorbed in an atmosphere of encouragement.

I then discussed this with the writer. He articulated that he wasn’t going to sugar-coat things because they might hurt someone’s feelings; that if everyone were to only give positive reviews, it would be pretty challenging for artists to advance creatively.

And so we arrive at the trivial nature of cultural criticism: Discorder is a publication supporting Vancouver’s local arts and culture, both with an open mind and with the inevitability of forming personal relationships within the community.

I agree that it doesn’t help to kick someone when they’re down. It might not make them play better at their next show, or at the show after that. But if someone wants to venture out as an artist, they need to be prepared not just for criticism, but for the fact that in the world of music criticism — a world where often, writers and musicians aren’t getting paid, a world where writers are covering their friends, or are influenced by the opinions of those they think are cool or uncool — there is no objective criticism, just as there is no objectively good or bad art.

Sometimes you’re going to get a writer who is walking into your set with few preconceived opinions, and other times, it’s your friend who believes you’re amazing even when you hit the wrong notes.

Discorder is a thoughtful compilation of arts journalism by writers who are willing to give up their time to showcase Vancouver’s creative class. I hope that those writing, reading, and being written about, can see that we are all here to make art happen.

As this month’s co-Editor-in-Chief, I have enjoyed continuing this tradition and I wish you an engaging read in this admittedly subjective magazine.
As always,