Fred and Toody Cole are survivors. Fred has played in a dozen bands since the early ‘60s and Toody’s been playing bass since the early ‘80s. Dead Moon, the three-piece they formed in 1987, was on its way to a new level of prominence when the band broke up in 2006, having been the subject of a documentary and a two-disc Sub Pop retrospective. Thankfully, Fred and Toody have started up again with a new drummer, Kelly Halliburton, and are now touring as Pierced Arrows.

I had seen Dead Moon twice before their demise, and couldn’t wait to see this new incarnation. I got to the Railway at 6:30, unwilling to risk the slightest chance of getting stuck in line. As it turned out, this was overly cautious, but a pulled pork sandwich (the Railway kitchen’s finest achievement) helped to pass the time. By 10, I had great seats and the place was packed.

Motordaddy on theremin, kicked things off. As you’d expect with a name like that, they sang songs like “Hands Off My Bike” and “Kickstart,” but also played a rollicking cover of “Swing Low, Sweet Chariot.” Next up, Thee Manipulators played organ-driven psych that had the crowd go-go dancing. The people were primed.

The Railway was stifling by the time Pierced Arrows hit the stage. The band kicked into “Guns of Thunder” and the whole front room became a writhing mass. Pierced Arrows, like Dead Moon, play straight-ahead, unadorned hard rock. Fred and Toody’s vocals often seemed on the verge of cracking—it was an exhilarating performance.

Towards the end of the set, the heat and lack of air flow became overwhelming, so much so that Toody appeared to pass out on stage. Fred helped her up and they took five minutes to recover. Then, amazingly, they finished the show, rocking as hard as ever. 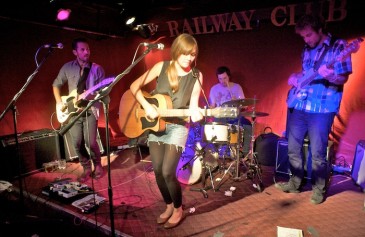