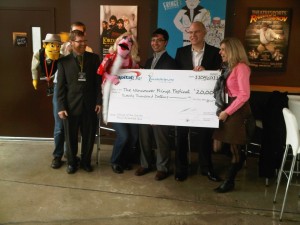 DOXA: Picture Start
Vancouver’s Documentary Film Festival, DOXA, is on now until May 15th. Premiering on Feb 12 is Picture Start, about the a group of iconic Vancouver artists including Jeff Wall, Ian Wallace and Rodney Graham. Director Harry Killas is on the show to talk about the ‘Vancouver School’ of artists.

Picture Start will be at the Vancity Theatre on May 12, at 7pm. For more info go to www.doxafestival.ca

Hell resembles nothing so much as a dreary industrial city in the north of England, its denizens free to leave whenever they like – aboard a bus bound for a heaven that’s like nothing you’ve ever imagined. A theologically dazzling journey studded with memorable characters, mind-spinning dialogue, and images of human folly and sublime hope that will forever change the way you see eternity.

GREAT DIVORCE adapted by George Drance & The Magis Theatre from the novel by C.S. Lewis will be at Pacific Theatre from May 20 to June 18. For more info, go to www.pacifictheatre.org

Ten Seconds
There’s now a little art added to the usual ads and transit info at Canada Line Skytrain stations. It’s called Ten Seconds and it’s brought to you by On Main. Paul Wong, the curator, tells us more on today’s show.

Listen in today at 5PM.