We live in provocative times. There’s a new shock blazing a streak across the headlines every day. It is easy to feel as if a bolt is loose in the machinery of the world, and things are coming apart. And always the question: what do we do about it?

The folks at Pi Theatre have decided to answer by provoking back. However, the results are not what you might expect. As I hope the definition overload demonstrates, the meaning of “provocative” has changed before, and perhaps it is changing again.

This is the first year of Pi Theatre’s Provocateurs Series. They inaugurated it with two pieces: Lady Parts, which was presented in four parts, and Pearle Harbour’s Chautauqua.

Chautauqua comes from Toronto-based theatre artist and drag queen Justin Miller, or rather, Pearle Harbour: an “all-American gal who’s sweet-as-pie and sharp-as-nails.” (For the purposes of this article, Justin Miller created Pearle Harbour, and Pearle Harbour created Chautauqua.) Ms. Harbour leads her audience through a good old-fashioned Chautauqua – a real adult educational movement which sprung up through rural America and saw popularity in the 19th and early 20th century. Look it up!

The production is a fascinating mix of drag show, tent revival, and puppet theatre. Miller’s Pearle is a round and fully defined character, with wells of hidden depth which burst out in powerful moments throughout the night. The show balances humour and pathos in equal measure.

Yet, the fascinating thing about this show – in this specific series – is that not much about Pearle Harbour’s Chautauqua directly tries to be “provocative.” The performance did not provoke in the ways we have come to expect. It did not intend to shock, or frustrate, or confuse – some of the terms that come to mind in relation to the word. If this is “provocateering” [sic], as Miller calls it, it is a deeply comforting kind. 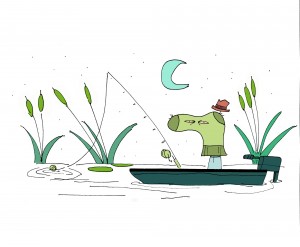 Chautauqua does begin with a small act of provocation. Each audience member is given a ping-pong ball, which assigns them a seat. This choice is first met with surprise by an audience used to picking their seats weeks in advance. However, its purpose is soon made clear, as the randomized seating allows the audience to open up to new connections, allowing for them to become a little community– if only for a night. This sort of focus on the value, and the difficulty, of community would permeate the show.

In past years, the idea of “provocative theatre” elicited imagery of violence, tragedy, conflict, and confusion. Today these sorts of images are readily available. With a quick Google search, a menagerie of atrocities are at your fingertips. What is harder to find, less expected, and possibly more powerful, is kindness.

Words such as kindness, warmth, love, seem shockingly naïve to a modern audience, maybe even downright dangerous. A smart, plugged-in audience which expects violence, tragedy, conflict, and confusion can have trouble accepting kindness. It seems, at times, saccharine.

However, when you have become accustomed to violence as the norm, perhaps the only way to jolt you out of this is the opposite. When, then, we are asked to be kinder and to foster community – as Pearle Harbour asks of us – it is a provocation. We could benefit from being provoked like this more often.

You can keep up to date with future acts in Pi’s Provocateurs Series via the theatre’s website or facebook, and watch for Pearle’s upcoming shows here.

Our banner image for this piece is by Kalena Mackiewicz.