I sat down for early-morning coffee with 18-year-old hip hop artist Prado to chat about Vancouver’s hip hop scene, challenging bro culture, and thriving as a woman of colour.

Ivanna: Where did you grow up?

Prado: I grew up in Vancouver — the Joyce / Renfrew area, but not like, the good Renfrew. All the coloured people stuck in that one area. I didn’t go to school with white kids at all. It wasn’t like, Lord Byng or some shit.

I: When did you first start making music?

P: When I was 14, off of Garageband. Then I found Soundcloud and started building an online presence. No one knew I was a girl; I was just known as AlienKanye. People who liked my stuff would ask if I made the beat, and who the girl was singing on the track, and I was like, “Hah, I did them both.”

I: What compelled you to start performing?

P: Well, about a year ago I was getting really serious about music, and I knew these boys from my neighbourhood. We made a group called Dead Poets. But literally, one of the dudes snatched the mic out of my hand during our first performance. They wanted me to play only bangers, and act in a certain way. I wasn’t invited to certain meets, I was writing “overly emotional,” and my ideas were shut down. I knew these guys didn’t respect me as their equal. 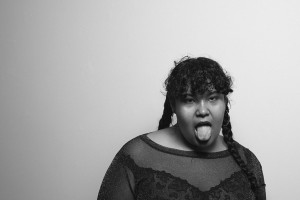 I: How’d you get out of that situation?

P: I jumped ship. I didn’t want to take anyone with me. I was like, “Floaters, grab a fucking life vest,” and they ended up eventually dropping the project because they just weren’t working. I honestly had a falling out because I repositioned my target audience. I didn’t want to be the Lauren Hill of the group. I want to help women in the industry, not raise up men, who most of the time don’t work as hard as women do.

At the time I was [also] ghostwriting for some big rappers, and I got discovered that way last year. If you want to actually do something, you have to constantly be working. When I get up in the morning, I promote myself, I make music, I go to studio meets. I do everything that I possibly can. Especially if you’re an oppressed minority, you have to do it even harder than anybody else. That’s just how it goes.

I: In what ways do you challenge ‘bro culture,’ and make space?

I’m a bigger-bodied person. I was literally born like, 11.5 pounds — a big bitch from the womb. My dad always told me that when you’re a bigger person, you’ll always get due respect from people if you demand it. In my music, I express doubt, but putting it there makes it so the doubt doesn’t linger on my body. It’s cleansing, liberating. And that’s what I want for other people. There are no rules.

I: What’s your view on the hip hop scene here? How do you see hip hop evolving?

P: I feel like it’s happening. People who have bad things to say about the scene are really stuck in asking “What is hip hop, what is hip hop?” You know what I mean? But hip hop can be anything now. As long as it bumps, it’s working properly.

I: Do you feel like putting conceptual limitations on hip hop — what it can and should be — is just another way of confining people of colour?

P: Yes, and people should be challenging that. I try to challenge that with singing; So Loki is challenging that with unique electronic beats. Being Black is cool as fuck now. You know, hip hop culture has been so berated. I feel like there was a time when hip hop wasn’t cool — that was the real oppressed days — but now it’s cool to be Black, it’s cool to make hip hop.

I: Do you see yourself as a role model for women of colour who are coming up in the scene?

P: That’s what I want the most. When I meet other artists, my main concern is deciphering what the purpose of their art is. Like, I get it; everybody wants money, everybody wants to be a famous artist, but are you doing things to make sure that your community is safe? Are you catering to the right people? I want my music and everything that I do to be oriented towards women of colour and women being comfortable. I’m fighting for accessible spaces.

P: My goal is to build a [safe] studio for women of colour to come record, and it’ll be exclusive — no open door policy. I’m trying to build a community of women who will be strong in their professions, and have a space to do that in, and not have to be controlled by some dude at a table, telling [us] how to do things. I want to make something authentic. I don’t want to deal with bullshit.

I: What other projects do you have going?

My sister and I are publishing a book [called] Superniño — a nickname my dad had — that’ll [include] photos and poetry. He’s Afro-Colombian and came to Canada on a boat. We tell stories about our childhood, working our way out of poverty, not having money and eating at like, Little Caesars — just special shit that’s important to us. It’s really an emotional book. It’ll be released in July, on a tight budget — 100 copies. We wanted to focus on, and have it produced by, people of colour. There’s already books that white people have written about like, the potato famine or whatever. So, you know, I just want to tell a story that’s not being told in 2017.

I: Where do you see your music going over the next few years?

P: I’ll still be doing what I do. People expect to be relaxing or some shit after a few years, but life is not relaxation. I’m going to be working. Every single day I wake up and I’m like, I gotta do this. That’s how it’s always gonna be and I’m happy with it. I’m fine, I’m awake.

Listen to Prado at soundcloud.com/alienkanye and follow @lilkanye on Instagram for upcoming shows and such. You won’t be disappointed.