“Were we to undertake an exhaustive self-scrutiny, disgust would paralyze us…”

Any time spent reflecting upon social interaction inevitably convenes upon gestures, the visual vocabulary of body language that informs us both consciously and unconsciously. Some, like Amy Cuddy, exploit their analysis of gestures to market “power posing” for the suited masses climbing the corporate ladder, change your body language and land the job. “Fake it ‘til you become it.”

Enter Gesture’s glowering swan song, No Past, It Started All Over Again, holding a mirror to Cuddy’s charlatan posturing by examining the crippling mess of a life of fakery. For just under 27 angular minutes, Andy Resto (guitar / vocals), Nellie Stark (bass) and Eleanor Wearing (drums / vocals) turn inward to reflect upon the terror of the oracle’s Socratic motto “Know Thyself.”

The opening track “June” finds our narrator petrified by malls and parking garages, yearning for quiet, solitary spaces. But, when such a space is found “In A Clearing,” there is no repose. Instead, he finds “morbid erotic longing” and groups of faceless people treading all over them. Though seeking an escape from superficial socializing, the stoic wonders, “Hissing. Is it what becomes of my breathing when I’m through with speaking?” On “Windowshades,” this self-awareness builds into agoraphobia, as Resto pulls down the blinds to hide from the faces the stare through a glass darkly. When the album closes with “Pale Sky,” we understand Resto’s fear of the others’ gaze as he reveals their endgame: to scoop out his insides and examine him, exhumed, once and for all. This is not hip cynicism, but real, white-knuckled fear.

Though not a band of technical flourish, Gesture possess a definitive style that mines the rich, untapped vein of Slint’s “Don, Aman.” Resto’s guitar lines wind in and out of harmony, passing through major and minor tonalities only incidentally, while ultimately exploring the dissonant space between. These winding lines are complemented by Wearing’s drums, which follows the guitar with inventive and dynamic percussive synergy as Stark’s bass lurks in the shadows. As the album creeps on, intermittent major chords and shifting meter begin to sound deeply unsettling, as if sitting quietly in the trough of a wave.

“Pale Sky” closes the album when Resto admits that he’s “out of relevant thoughts,” which seems as fine a place as any to end an album. But as the last notes fade out, I wonder if the revelations of this album yield any catharsis. Am I still just going through the motions? Are we doomed to fakery? Are we better off opaque from ourselves? I sit and stare, paralyzed by the incompatibility of action and self-knowledge. 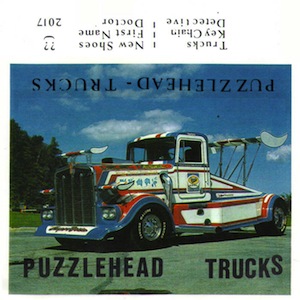