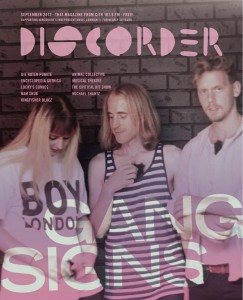 In the middle of a lengthy email thread attempting to coordinate band, photographer, and writer schedules for an interview with Gang Signs, Discorder received an unusual request.

“How about we all eat something odd/gross and chase it with something even more potent/gross?” wrote Gang Signs’ Peter Ricq. The idea quickly evolved into a kind of game, where members of the band would consume a food and beverage combination given to them by lottery. “Make two combos yummy! One gross one!” Ricq said over email.

“I want the pizza!” says Sarenac, reaching out next to pick next. “Oh, wait, I want this, whatever this is. What is this? A piece of cake?”

Ricq eyes Sarenac’s treat, “I kind of want to all share now.”

“Can we?” Sarenac asks, taking up the beverage portion of her combo, a can of fruit juice and tequila. “I like this game.”

Observing the band go through this strange food surprise exercise feels like sitting with a group of teenagers in their parents’ basement, trying to stave off boredom by creating a game out of whatever is at hand. Each person is willing and good humored, but at the same time somewhat retiring and seemingly unconcerned with the outcome. There is an atmosphere in the interview that you can hear in Gang Signs’ music as well, a kind of lo-fi electro that has been dubbed by listeners as “slacker dance.”

From across the small room, Fink reaches forward for the final package. “I’m going to have to eat something gross now,” he sighs, inciting laughter from his band mates. The others look on as Fink draws a flat plastic package from the bag.

“’Black Moss’” reads Fink from the package, “I don’t even know what black moss is.” With little else but the name to go on—the back of the package reads simply, “ingredients: black moss”—and the fact that it was found in the dried foods section of T & T Supermarket, Fink opens the package and removes a clump of wiry black fibres. “You want to see me eat this? All right.”

“Oh my god,” comments Sarenac, “I would not eat that shit.”

“Oh no,” says Ricq as Fink grabs a hold of his beverage. “What is that?”

Everyone in the band shares in the spoils of the game. Sarenac eats most of Ricq’s pizza. Everyone tries the moss, as Fink says, “It honestly doesn’t taste like anything. You want some on your pizza?”

Sarenac refuses and Ricq say, “It’s like eating fucking pubic hair. You can’t even chew it.” Their easy and familiar way with each other evokes the air of lifelong friendship, an impression belied by their very disparate places of origin. Sarenac was born in Croatia, her family immigrating to Canada via Toronto in the mid ‘90s, eventually moving west to Vancouver where she’s lived most of her life. Ricq hails from Montreal, a fact given away by his lightly inflected English. And Fink, raised in Whitehorse, bee-lined for Vancouver after graduating high school in order to play music.

It’s obvious from listening to the band talk that their love of music binds them together. Fink, a self-described music freak, has played in bands since a young age and keeps a handful of projects in rotation, just like his bandmates. Ricq, possibly best known as half of the dance act HUMANS, has added Gang Signs and another side project, Ladyfrnd, to his list of his extra-curricular activities. Sarenac keeps busy as winniecooper.net associate and DJ, Wobangs. When asked about previous band experiences, Sarenac recounts her days as a 15 year-old member of local pop sensation Mystique.

“We had a single called ‘Mystique Knows How to Party’ and there’s a music video too.” She teased us, revealing that the only way to see the video was on VHS.

Discussing the origins of the Gang Signs line up, Ricq recalls seeing Sarenac sing Patsy Cline’s “Crazy” at karaoke one night. “When she sang it was like [makes a rapturous face]… Wooooah, I gotta start a band with that girl!”

“I always had the idea of starting a band with a girl. I think it’s pretty neat — that voice? Having that juxtaposition of male and female, I find it is very… inviting. And Adam is always just down to play drums.”

“Yeah,” agrees Fink, “we’ve known each other for a while, it’s just one of those things.” 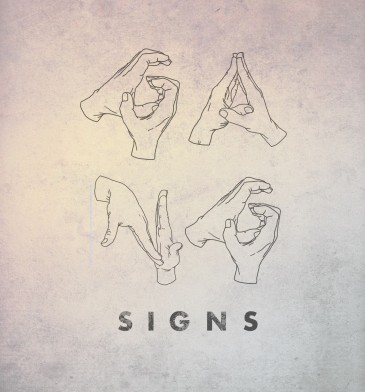 That “thing” is now manifest in an eight-song self-titled EP, released this August. The band’s take on how the EP came together seems nothing short of synergistic. Songwriting and recording at home in his spare time earlier this year, Ricq got the bulk of the material ready for the rest of the band to record with—21 songs in total. Once Sarenac’s vocals were recorded, all that was left was the drum tracks, which Fink pounded out in a single session at Watershed Studios.

“And it wasn’t because we were short on cash or had any limitations,” Fink is careful to clarify. “Everything just seemed like it worked. It was exactly how we wanted it to sound.”

Following their EP release party at the Cobalt on August 31, the band is slated to open for Nite Jewel on September 10, at the Waldorf. Later in the month they will be a part of a Winnie Cooper-sponsored showcase at the Biltmore on September 21 during Olio Festival. Beyond that, no grand plans are being schemed, besides spreading their spooky, synthy pop through the airwaves and across the globe. “We’re doing this EP so people outside of Vancouver get to know us,” explains Ricq.

Unsure of what the future holds, the band cracks open some fortune cookies to wash away the taste of the black moss and maybe catch a glimpse of what’s to come. But then we added “in bed” to the end of each fortune.

Ricq: You will soon receive compliments on your style [in bed]

Fink: An appeal for some assistance may catch you off guard [in bed]

Sarenac: A new approach will bring you greater career success [in bed]