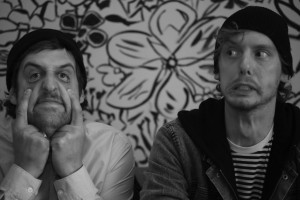 The anthemic line, “Who knew / that all we had to do was party?” on the opening track on Humans’ EP, Avec Mes Mecs, reaches out of the song, hinting at who Humans are and what the band is about. The band has been labeled “party band of the moment” by various bloggers and that label sits just fine with Robbie Slade (vocals, guitar, keys) and Peter Ricq (sampler, sequencer, drum machine). “When I go out, I want to party, so if people say they’re going to party when they see Humans, I’ll gladly take that and roll with it,” Ricq said.
Partying to Ricq and Slade often means dancing, and, according to interviews with Ion and Exclaim!, all Humans want is for their audiences to dance. “Just dancing up a storm—it’s the epitome of enjoying music, being able to dance to it,” Slade explained, “Everyone knows how to dance, like, no matter what language you speak or no matter what, you always laugh the same language and dance the same language, you know? Everyone automatically gets it. Dancing, they get it.”

Slade and Ricq see dancing and singing along as audience participation. “It’s almost like you’re jamming with them. It’s like you’re playing music with everyone,” Slade said.

Humans’ own jamming sessions and songwriting process have evolved since the band started in 2008. “Back in the day, I’d write a complete song on the guitar, and like sing it, and that was fun on its own. And then Pete would be like, ‘OK.’ And he’d like chop and screw it, I guess. He’d do his thing with it and it would be completely separate. And that was fine. But now, I feel like we can achieve more when we do it together.” Slade said. “I don’t even feel like writing without Pete these days.”

You wouldn’t necessarily think that Slade and Ricq’s musical backgrounds would mesh. Slade has worked in roots and reggae, while Ricq has primarily focused on electronic music. Ricq explained that he had been writing a lot of electro beats when Slade started joining him. Slade would introduce a drumbeat or use more organic sounds that Ricq had thought about using, but never actually implemented. “I’d been writing this particular style of song for so long, that to have [Slade] come by and be like ‘No, no, no,’” Ricq said, illustrating what he meant by rearranging items on the table, “‘We’re gonna do it like this,’ it was like, ‘Oh yeah, why didn’t I think of that before?” The clash in backgrounds ended up breeding something fresh.

“The response to our first songs was really positive and, like I’ve said before to other people, I had to convince Robbie too in the beginning ‘cause he didn’t see this as a real live performance thing,” Ricq explained. Although Slade’s voice and instrumentation had been sampled, the samples are removed when the duo plays live.

Since then, however, their songwriting process has evolved. “Pete’s been singing more, so Pete’ll like, sing. And it’s fun for him, and I’m like working on the gear…” Slade said. Ricq interjected, saying, “It’s like we’re switching roles.”

“It’s really fun,” Slade elaborated. “And then, in a part in the song, we’ll switch again to our comfortable position, and it’s like, ‘Whoa!’ It’s like really fun, ‘cause we get big into it and we both get better at it … It’s really fun exploring each other a bit more.”

Another way in which Humans have been exploring each other is through their video projects. Ricq ultimately wants to make feature films; he’s the director behind their video for “Bike Home” and for their recent short film, “The End.” Slade has certainly been involved, coming up with the concept for “Bike Home” and acting in “The End,” which premiered at their EP’s launch party at the Cobalt on Oct. 15. The music for “The End” can’t be found on the EP, however. It was written specifically for the film. When asked if the music will be available in the future, Ricq responded by saying, “It would be like a bonus track if anything. Or it will be like a free song that we’ll give out.”

“[‘The End’] is a B-movie, so it starts out like a serious date, like really cute, and then it ends up being a gore-fest,” Ricq said, describing the film. “What you see [in the preview on YouTube] is the beginning [of the film] and it’s nice and sweet and then with the reveal of the hands in the picnic, the movie just takes a turn and the music changes completely too.”

“We have a lot of minors [keys], so we use a lot of sad melodies. It’s kind of tongue-in-cheek sad though,” Ricq explained. “Some of it’s kinda, like, if we go into minor sometimes, but it’s like talking about pizza boxes or some shit. It’s like, ‘Just kidding, we’re not really that sad,’ you know what I mean [laughing].”

Humans is currently on tour and will be joined by No More Strangers’ DJ Tristan Orchard when they hit the east coast mid-November. 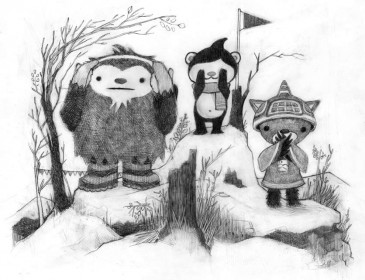