Rooney’s Robert Schwartzman, performing as a solo act, and Weezer’s Brian Bell, performing with his band the Relationship, co-headlined on March 20 to a sparse Biltmore crowd that probably showed up just to get a glimpse of their musical heroes from when they were in junior high. At least that’s why I was there.

But first up was local singer/songwriter Jasper Sloan Yip. The Vancouver folk-pop singer started the night with his band, which included violin, electric upright bass, drums and a designated harmonica player. In a string of lively acoustic songs, the band never missed a beat, even with all the dynamic builds, stops and starts. They had synchronized energy that you could really feed off of.

Yip had amazing control of his deceivingly gentle voice. It was soft and alluring, like on the mellow “Oh My God,” but also sustained a steady and expressive crescendo that had the command of Dan Mangan. The lively harmonica returned for the last song “Transit,” and its train-chugging beat and clever lyrics got a few more bodies from the quiet crowd to start moving, and even stand up.

Unfortunately, the energy died down for the next set. Seeing Bell that close would have made the 13-year-old in me scream with joy; I’m pretty sure I did when he stepped out of the green room. With Bell’s sassy presence, I wanted so much to like the Relationship’s set. Sadly, they didn’t deliver. Two band members couldn’t cross the border into Canada and were replaced last minute. The lack of chemistry between the band showed and things just weren’t clicking. The opening song “Please Help Me,” which had a delightful Beatles, à la “Ticket to Ride” guitar riff, and grooving vocals in the vein of Elvis Costello, was the only glimmer of promise.

Ending the night was Schwartzman, who worked his disco-eighties pop magic to get the crowd in a dancing mood. Schwartzman broke into the catchy “Funny Money,” best described as roller rink music; and I mean that in a good way. The crunchy guitar with cheesy synth notes sprinkled on top made for a fun and tacky set. Schwartzman kept things interesting by performing a daring cover of Kate Bush’s “Running Up That Hill.” But, from then on, the set went lukewarm, especially with the final song of the night, “All My Life.” It was an overly sentimental love ballad where Schwartzman struggled to hit the high notes.

Interestingly enough, it was opener Yip who avoided any vocal problems or lack of chemistry with his bandmates. It never ceases to amaze me when the opening act blows the headliners out of the water and is the performance that sticks in your mind afterward. 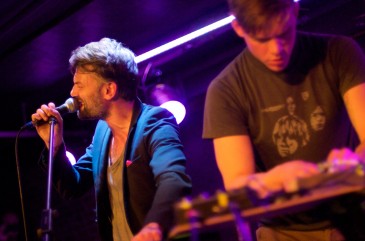