Killing Time
It was a good turnout for a Thursday, considering the local hip-oisie had to choose between this
gig at the Media Club and the Jeans Wilder, Dirty Beaches and Watermelon show at the Waldorf. Locals Von Bingen set the mood perfectly with layered flute samples, heavily delayed guitar and vintage analog synths. The trio created well thought out, involved soundscapes, which brought to mind early Krautrock pioneers Kluster or French prog outfit Heldon. I had never seen them before, and I’ll make sure to never miss them in the future.

Judging by their physical appearance, Young Prisms are extremely young. Their early 90’s-influenced sound is equal parts dream pop and indie, but to call them My Bloody Tengo is too dismissive. True, lead vocalist Stefanie Hodapp’s sultry singing style, reminiscent of Yo La Tengo’s Georgia Hubley, and Matt Allen’s whammy bar work made me want to listen to My Bloody Valentine’s Loveless for the 100000000000th time, but they have transformed their influences into something that sounds modern and upbeat. The bassist, however was constantly complaining about his monitor, so much in fact that it held up each song about five minutes.

After some tasty 50’s elevator music by the DJ (full disclosure: this was me), Ripley Johnson and Sanae Yamada, better known as Moon Duo, approached the stage. They weren’t unfriendly, just incredibly focused on cranking out their signature two-note drone style of modern psychedelia. Favorites such as “Motorcycle, I Love You,” from last year’s fantastic Escape EP chugged along beautifully with newer tunes like “Goners,” off of their latest album, Mazes. I was incredibly impressed how full and mesmerizing their sound was for a two-piece. Also, the chops that Johnson let loose on his guitar was sheer sonic overload. I overheard a lot of conversations comparing them to Wooden Shijps, Johnson’s other group, but shared membership is the only thing these two groups have in common. Moon Duo utilize an aesthetic that hearkens back to Suicide, but they sound fresh, inviting and most importantly, relevant for 2011. They’re still one of my favourites. I’m glad they exist and even more glad that they didn’t suck live. 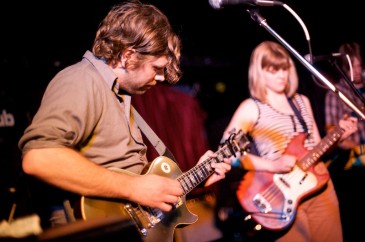