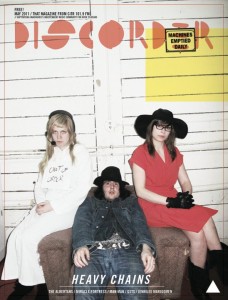 Discorder recently caught up with local thrash/noise band Heavy Chains in their studio on Hastings. Speaking above the din of other artists working and drinking in the canvas-lined studio, Heavy Chains chatted about their experiences in the band. It wasn’t long before their humour and sarcasm gave the interview a new tone, and everything flowed from there—just like their music.

The artists in Heavy Chains aren’t new to the stage: members Anne-Marie Vassiliou and Andrea Lukic play in White Lung and Nü Sensae, respectively. The gritty grunge punk act is rounded out by Brody McKnight. He can’t keep still on stage. He usually seems like he could care less if there’s anyone watching him, preferring to keep his back turned to the crowd as he wails on his guitar. Lukic’s energy is concentrated in her brutal vocals, but she has enough stamina left over to hammer out punishing and repetitive bass lines à la Brainbombs. Meanwhile, Vassiliou stays perfectly composed as she assaults the drums with precision. Their new album, A Very Real Hell, comes out this month on local imprint Broadway to Boundary. You should check it out.

Discorder: [To McKnight] Are you in any other bands right now?

Brody McKnight: Yeah. Well, sort of. One doesn’t have a name. We haven’t done anything yet. We’ve been practicing for a year. It’s a slow process. [Heavy Chains] is the band that I’ve been doing a lot more stuff with.

AL: You should call it Chinese Democracy.

BM: I should; probably will.

D: Then you’d have to sound like you have Guns N’ Roses influence.

AL: Everyone has a GNR influence.

D: [To Lukic and Vassiliou] You both play in pretty well-received and well-liked bands. How do you balance being in two bands?

Anne-Marie Vassiliou: It takes a lot out of us. It’s exhausting.

AL: The songs are so heavy [but] we manage. We get by.

AMV: We scrape by.

D: Do you find that being in Heavy Chains is a well needed alternative to the other bands you’re in? Did you start it to do something different?

BM: I think it was just to make this as easy on us as possible: one riff for the whole song. But this turned out to be super hard because when you have verses and choruses you can kind of tell where you are. I find that I have to think more, because if I’m playing the same riff over and over again, I have to pay more attention to what the drums are doing. I don’t know what she’s [Lukic] doing on vocals. So, it’s more difficult. It’s a tough band to be in.

AL: But it pays off. Wait ‘til this album comes out. There’ll be a big payoff.

D: There was a Heavy Chains song that Andrea put on a playlist a while ago called “Heavy Chains 5” that sounds really different than your live shows; the song is much more bass-heavy and the vocals are much more tame than on the new album, too. It sounds a lot more like Nü Sensae.

AL: That one was recorded on a four-track. We changed a few things in that song. But it could just be the quality of the recording. Nü Sensae just recorded on shit. So that might have something to do with it.

D: I searched the term “Heavy Chains” and found that it refers to biology. Then I noticed a song by the Japanese metal band…

D: Yeah. Is that where you got your name?

BM: No. I think I thought of it one day; it came really fast. We were trying to think of a band name and I thought of it one day and I told them at some show and they liked it. I think I saw it somewhere. [To Lukic:] You told me that you went to some club in Europe called Chains, a metal bar. And I work in a stock room for a record store and I saw a sticker that said “heavy” on it, and I just thought of the story she told me, and I just saw that word. It’s pretty obvious. I knew about that Loudness song before, but it didn’t come from that. Some people think it came from [a] Gucci Mane [song].

AMV: Yeah, there’s a song called “Heavy” and he says something about his chains.

D: Did you see that photo of Lil’ Wayne wearing a punk vest?

D: He’s got an Anti-Cimex patch and studs all over his black leather vest.

BM: Is that a recent photo?

AL: Maybe he’s just mad that he’s been in prison for so long so he needs to get into more aggressive music.

D: Well, I was convinced that your band name came from that Loudness song because Andrea’s vocals remind me of G.I.S.M. a little bit. When I saw that there was a Japanese metal song called “Heavy Chains,” I thought it just made sense that you’d be influenced by Japanese punk and metal.

BM: Yeah, we do a G.I.S.M. cover that’s coming out on a seven-inch in a couple months.

AL: I think we’re influenced by a lot of things.

BM: Yeah, it wasn’t a main influence going into the band.

BM: But that came later. That was almost a year later. But I don’t know what it was [that influenced us]. It was just being brutal all the time. More brutal. [sarcastically] Every time we have practice, Anne-Marie is like “We’ve gotta write a song that’s more brutal.” If there was a pedal that just had a “Brutal” setting on it, we’d have five of them turned up, and that’s us.

D: Cool. I’ve been thinking about the local scene and I’ve noticed that Heavy Chains doesn’t really fit into anything that’s going on right now.

AL: Maybe we started this band because we wanted to make music that we would go see. The repetitiveness of the Brainbombs…

AL: Yeah, we’re influenced by bands like that. So, that would make sense.

BM: We really want to get on Geffen. So we tried to tailor our sound to what Geffen would want. We wanna be on the same label as Nirvana and Sonic Youth [were in] the ‘90s.

D: Do you wish you could go back in time?

AL: With the knowledge I have now…

AMV: You could start the Internet.

AL: That would be so cool.

BM: Like in Back To The Future 2, I’d just take a sports almanac back and bid on hockey. Just become rich.

AL: Yeah, I’d definitely go to the past. Any decade, aside from the ‘90s. I don’t have any desire to go… maybe the early ‘90s. I don’t know… I’d go stop a war too. I’d stop WWII. I’d write Harry Potter, or something. I saw the new movie, it was so good. I’ve never read any of it or seen any of the other movies, but I thought it was good.

D: I think that was the worst one.

BM: I’ve never seen any of it. I have no idea what it’s about.

AMV: Me neither. Or read them. It grosses me out.

AL: The movie is great. Daniel [Pitout, Nü Sensae’s drummer] had to force me to go and I thought it was gonna suck…But Harry Potter is for nerds.

D: Would you rather watch Star Trek?

AMV: I would never watch that either. It’s also for nerds.

AL: Heavy Chains doesn’t like anything that’s for nerds.

AL: Drown-a-nerd. [laughing] That’s gonna be our [album]: Drown A Nerd. It’ll be us smashing computers.

Heavy Chains play their record release party at the Astoria, May 10.