Three local bands playing at the Commodore? On a Saturday night? Really? Excitement! Not something you get to see every day at the Commodore—it was a major thumbs up for the local scene.

Bike bounced onto the stage and didn’t stop bouncing their entire set. They know how to put on a show and entertain like their lives depend on it. With their mix of horns, frenetic vocals and awesome bass lines, it is impossible not to be drawn into their happy, fervent, pop music.

Local Ska legends, Los Furios, took to the stage next and they were hot. As in caliente hot. Los Furios had the rambunctious audience breaking out into random mosh pits and there was even a crowd surfer at one point (very 2004). Their set was fast and relentless. Los Furios gave out one manic music punch after another. Every couple of songs, a pair of burlesque zombie-kitties took to the stage covering the front row in red glitter. They were cute but not really necessary. Los Furios were the band of the night. Unfortunately, it went downhill after that.

Scatterheart opened with singer Jessie Enright suspended from the ceiling. Sporting his trademark feather shoulder pads and belting his heart out, it was an impressive sight. The lighting and visuals were so slick they were almost a distraction from the music rather than an enhancement. There was a lot of strutting and posing (as in yoga) from the band and more then enough self-empowerment love talk.

After playing “1999,” “Somebody to Love” and “Pride,” Scatterheart appeared more of a covers band who played the occasional original track. They stood out in stark contrast to Bike and Los Furios, but not for the right reasons. It all looked good and in theory it should have worked, but it came off feeling contrived. There was heart but no soul. It was a disappointing end to an otherwise wonderful evening. 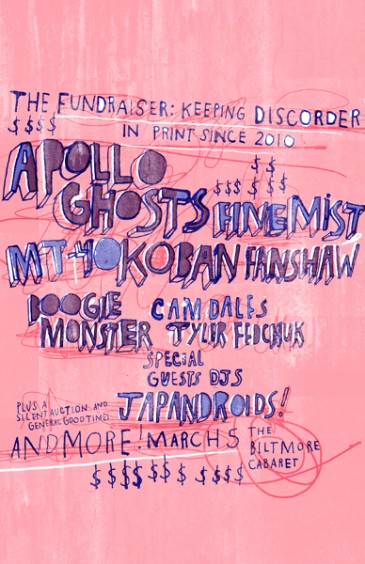