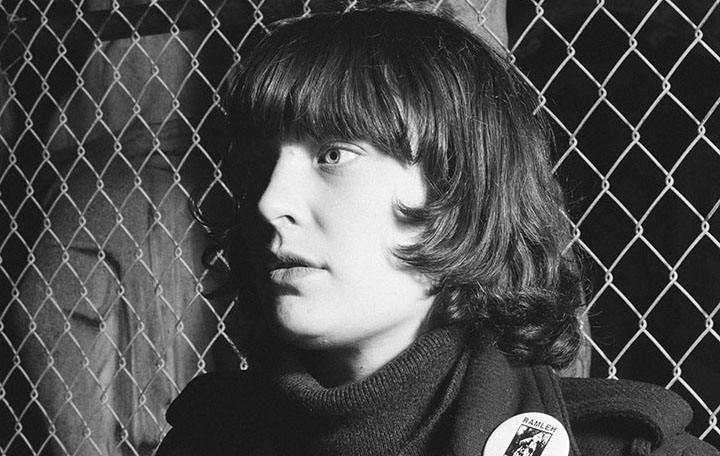 You can find poetry on Mel Paget’s personal webpage. One poem starts “Strawberry Soda” continuing with a succession of two lines, their margins uncomfortably overlaid, “Strawberry Denim / Strawberry Swastika.” Looking at each subsequent strawberry succession run into the line above, you can imagine the wall-of-sound, the tension of grinding teeth and overlapping alarms. Elsewhere, two mirroring images read respectively, “a breath of the perfume counter” and “freedom in a shopping bag.” It’s cheery and matter-of-fact: blackened truisms, botox smiles. Another poem reads, “I like the word ‘hysteric’ / I dislike the word ‘sensual.’” “Euphoric” is another word this voice dislikes.

These poems imply the psychological mores of Mass Marriage, the repository of Paget’s multi-disciplinary practice since 2011. Though native to Vancouver Island, Paget has been an essential element of the Vancouver noise scene for years. She’s currently completing a degree in visual arts at Emily Carr University of Art + Design. As Mass Marriage, Paget is working on a lathe 7’’ to be released on L.A. label Claimed Responsibility, and a book is beginning to coalesce.

If there is a kind of music that gets at the underlying violence of the everyday, it’s noise. Those who don’t listen to much of it will just hear the extreme dissonance and volume. But by niche standards, Mass Marriage makes tempered music, focused on teasing out the mutating artifacts of atonal repetition, and meditations of electronic clamour. Paget’s 2015 release, Moda c20, features harsh oscillations over an unrelenting drone.

Tracks from years past like “Orchid” sample melodic swells that teeter on poignant, with an alien beauty imbued through layers of feedback and distortion. Paired with visuals, the impression can be a kind of waking nightmare, the depressive isolation of being at a party on psychedelics, or submission in a bout of sleep paralysis. 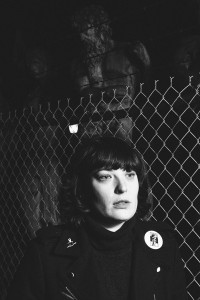 It’s late afternoon when I meet with Paget at Elysian on Broadway. We’re both sick. She describes a head-cold, gauzy ears; I have a disruptive cough. We start by talking about the origins of Mass Marriage, and Paget tells me, “I was making videos and animations and I wanted soundscapes for them. I just did it for myself, not for shows, until some time later.” Now much of her personal work falls into the discourse of Mass Marriage; photocopy burnt visuals complementing washed out snapshots, collages of want and VHS memory. Mass Marriage’s Tumblr reads, “Paget’s work envisions a manic character obsessed with female identity from high fashion to the female body in popular culture, to prostitution, all embroiled in a world of bizarre European genre cinema. These fixations are appropriated by Paget from various media sources and heavily processed into vivid, concentrated, abstract and abrasive sound and video…”

I ask Paget about these themes, and she explains, “I’ve gotten into exploring that more. I’m interested in female
identity, where people fall into good or evil. I was very interested in models, fashion, that industry, females in films or horror movies. How can I say without sounding like a total flake… I’ve always been drawn to the tragic female figure in literature, film; the hysteric woman.”

Paget also touches upon fashion and consumerism, women as an industry. “I’ve always been interested in avant-garde fashion. I grew up during early ‘90s; Fashion Files, supermodels …  When I was younger I’d watch and be so enthralled by that world. I guess I have an interest in how it’s kinda vapid, but it’s also this artform. It shapes people into different people …  [Fashion is] selling an idea of what kind of person someone wants to be. I like looking at older advertisements, like from the ‘80s. Things were very money, opulent. That’s the era of fashion I’m interested in, when things, economically, were at such a boom.”

Themes of ideation pair with Mass Marriage’s inclination to explore psychological states: Paget’s video for the track “NOTHING UNDERNEATH” features a clip from 1991 pink film Sweet Honey Juice. The clip opens with an audio excerpt from the 1985 giallo film Nothing Underneath: “A body, a face, a little bit of makeup, a beautiful dress, and nothing underneath. That’s all people ask of a model: nothing.”

Paget slows the footage to a snail’s pace, framing a woman’s face as a hairdresser grooms her. The music of Mass Marriage dominates the scene’s affect — a call and response between stuttering roars of sound and Paget’s own piercing vocals. The woman looks slightly off-camera, vaguely smiles. There’s an absolute abyss between the viewer-voyeur and whatever thoughts occupy her repose.

The noise is a numb dialogue, it roils and bristles against itself. Again, unlike many noise musicians, Mass Marriage is inclined to lock into a groove and contemplate a scene: ”I don’t listen to a lot of harsh noise in my spare time … I want [Mass Marriage] to be more atmospheric than static.” Among venerated outfits such as Atrax Morgue, Mauthausen Orchestra, Mayuko Hino, Macronympha, and Rusalka, Paget lists Ramleh as a heavy influence, a group which made similar moves away from outright cacophony and towards moods. She also references Vancouver’s own harsh noise wall innovator Sam McKinlay, a.k.a. The Rita.

“I saw [The Rita] play for the first time and it really kinda made me realize how mood altering you can make sound and how it’s not just listening. It plays with the space you’re in … So, that made me pay attention to spacing in noise. Before, I wanted it to sound as crazy as possible.” 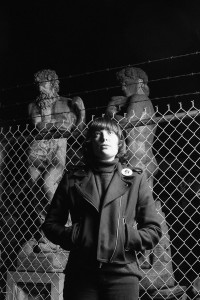 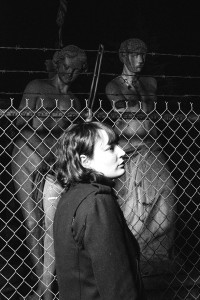 Mass Marriage shares its interest in genre film and the ideation of femininity with The Rita, which begs a question. The Hysterical Woman is an often invoked figure in darker electronic fare, from techno to industrial — these genres tempt controversies around misogyny, exclusivity, and the appropriation of women’s voices. However, Paget’s experience sheds another light. “It’s definitely a more male than female ratio; on paper, I guess. But, I think I haven’t had any experiences with that community, where I feel like I’ve had a gender issue. I think because it’s already such a small scene, people are happy anyone’s doing anything. The more trouble I’ve had is with people from the outside. Like, ‘Oh, you’re in the scene and it’s such a boy’s club,’ or ‘You’re female, why are you into that music that’s so aggressive, why aren’t you making nice dreamy pop?’ or something. So in that realm I’ve had more of a hard time with outsiders than insiders.”

As of this article, Paget will have completed a show with Blair Fitzpatrick and Sam RSA as Leather. They will have opened for L.A. grindcore trio, Sissy Spacek, which features the artist and noise luminary John Wiese. This world has extended Paget’s reach down the West Coast, into the U.S., connecting her with label heads and prominent figures. “I’ve been lucky … In places like L.A. people are supportive of experimental music, definitely Portland too. I think Vancouver is getting better. People are flourishing right now who aren’t just bands or DJs.”

It may be the mutual ailments, the busy thrum inside Elysian, or the high concentration of conversational noise as I sort through my recording, but I feel that Paget resists extrapolating at length on Mass Marriage beyond the bold artist’s statement. The messages carry themselves, and Mass Marriage is a bursting dialogue that resists neat conclusions. That said, we have a new 7’’ on Claimed Responsibility to look forward to, featuring more atmospheric material, suggesting another anchor of the Mass Marriage project.

With such high highs, I feel it’s appropriate to end on a suitably euphoric note, with Paget explaining the origin of her project’s name. It suggests, at the least, the degree to which expectations lend themselves to interruption. “I guess I just chose the name because it was a joke for myself. At the time I noticed bands with names like Mass Genocide and Mass Grave…you know, real negative vibes. And I thought it was funny to be Mass Marriage.”

It’s hard to say whether that’s a Ha Ha funny or something more askew. 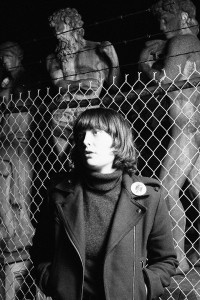 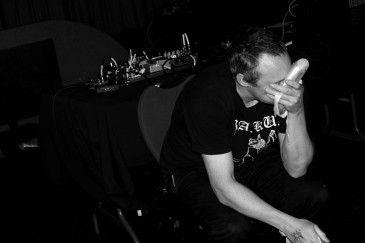 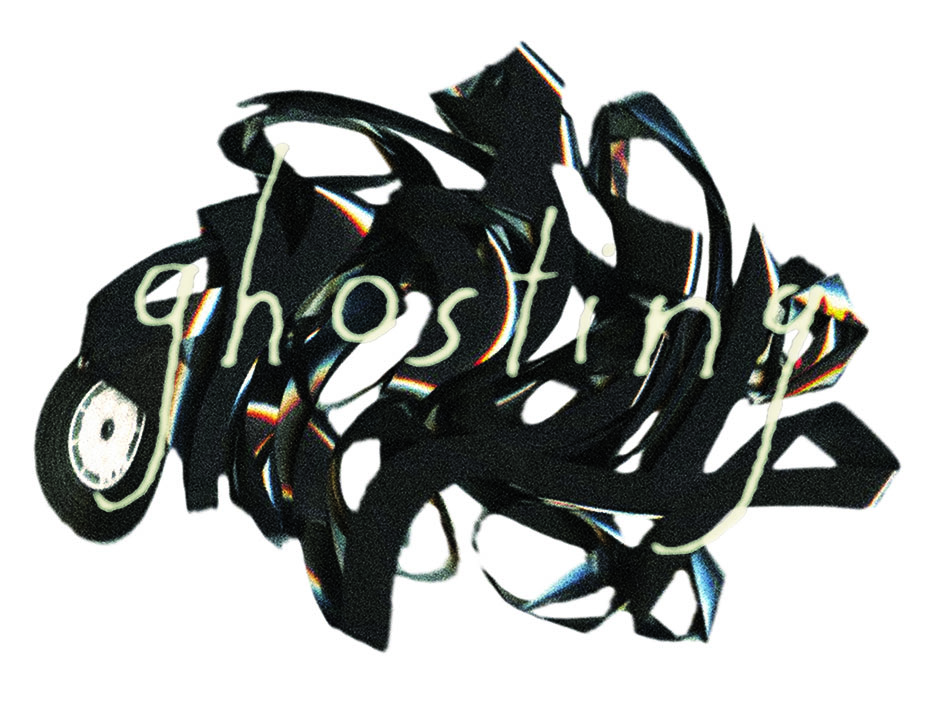