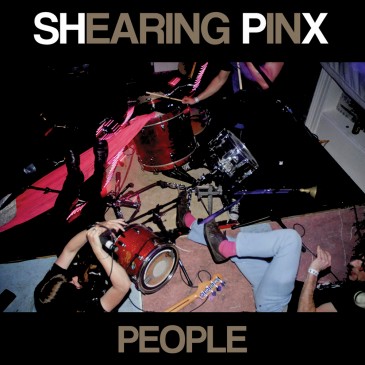 Noise rock miscreants Shearing Pinx are a different beast on their fourth LP, People. With the addition of S. Koke on bass and backing vocals, Nxc Hxghxs and Jerm are able to push their songwriting into different, if nonetheless uncompromising directions.

As is Shearing Pinx’s stock and trade after abusing ear drums for a decade, People feels as raw as an open wound. Many, if not all, of the tracks sound like they have been cut live from the floor of the studio, which matches the group’s improvisational aesthetic. The vocals are, by and large, audible and discernible which is to the band’s favour, as the vocal interplay between Koke and Hxghxs is one of the biggest strengths of this record. “Factory Sealed” sees a dirgey post-punk melody pushed to the breaking point while “Yes My Love” boasts a confrontational performance by Koke, buoyed by a punchy stop-start rhythm.

The album’s center piece, “Feel Young,” is the best showcase of Shearing Pinx capabilities as a jam based project. A selection of foreboding riffs  swirl around the listener like blood down a drain while Koke and Hxghxs sound increasingly strained and frantic with each passing verse. It’s a shame then that People seems to lose steam after the aforementioned “Feel Young,” as the remaining tracks feel free-form to the point of being simply meandering.

People has its moments and as a document of a live band ripping it up, the energy is undeniable. As with the noise rock genre in general, this record certainly isn’t for everyone but if you’re looking for a more accessible entry point into Shearing Pinx’s now decade spanning discography, start with this one.