On February 11 at The Rickshaw, Ariel Pink’s first words to his eager crowd were, “Where’s the smoke?” Whether his goal was to obscure our view or heighten the aesthetic, it was clear that the man had an eye for detail.

Before Ariel Pink’s whisper of an entrance, opening act Jack Name and his two bandmates formed a triangle and faced inward with their instruments. Occasional vocals droned out of the triangle’s peak. Name contributed to Ariel Pink’s 2014 release, Pom Pom, which explained his presence, but the act seemed a bit out of place.

Then, donning glitter and animal print loungewear, aviation goggles atop his head, Ariel Pink launched into songs from his new album.

I first saw Ariel Pink’s Haunted Graffiti at Malkin Bowl in 2010, opening for the Flaming Lips. Pink’s 2014 release undoubtedly showcases this influence — the first half of the set was infused with bizarre fun, spilling magic and dopamine onto the people below.

Ariel Pink’s fascination with post-production, evident in the album itself, carried over to the live performance. His vocals were a distortion of a distortion, amplifying the effect in the studio recording. The performance seemed to be less about hitting the right note and more about expanding the live medium.

Three songs in, Pink paid tribute to the late Kim Fowley before blasting into “Plastic Raincoats in the Pig Parade.” Co-written by Fowley, the upbeat track was a productive celebration of his impact on the band.

“Put Your Number in My Phone” was a love ballad of the modern day — slimy in its subject and cynical in its delivery. Pink performed the answering machine message found on the track, which reveals that although a woman did put her number in his phone, he completely blew her off. Pink’s high-pitched imitation of this woman trying to make contact was stomach-churning but accurate.

The spirit of the show was clearly divided near its midpoint. The up-tempo tracks of Pom Pom bled into its slower songs and other older material. Pink’s vocals switched from that of a cheery cult leader to a Morrisey-like murmur. He clutched a beer and conducted swaying fans with a drumstick.

The band’s energy stayed low for most of the second half, before picking up and closing the main set with the gorgeous “Dayzed Inn Daydreams.”

Drummer Don Bolles reintroduced Pink as the “Jester from Hades” before declaring that there would be no new songs in the encore. It was time for fans devoted to the band’s older sound to receive their just reward. The crowd became enraptured by the big hits, and the show closed on a satisfying note.

The audience did not disperse, but milled about in front of the venue for at least 20 minutes. The band expressed that they had paid a lot to get into this country but fortunately, the deal included unlimited fans willing to give them a tour. 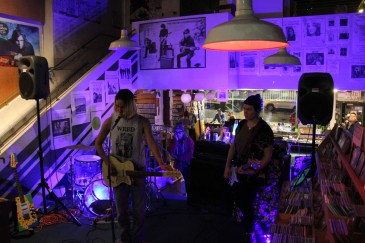