Modern Charms’ self-titled debut starts strong, with a set of well-arranged tracks which let the listener get a sense of this very foggy six-track dreamscape. But the bliss-pop aura starts to feel cookie cutter as it continues: provocative and meaningful in the way that cigarette smoke might seem emotionally charged when in the right lighting.

There’s no doubt that the three-piece had a clear vision of their sound for this album—one crafted in the mist of San Francisco and the wet forests of the Northwest—but they fail to fill their airy pop with texture. Doing little to move past golden-age shoegaze, the 12-inch ends up as an exercise of fill-in-the-blank-space-with-your-own-emotions. The vocals are excellent, the layering is pleasant, the drums are sublime, but it gets dull.

That said, brief guitar solos on the album, which often seem to carry a blues influence, give a glimpse of the band’s potential to move beyond shoegaze fuzz. Passionate and piercing, the lead guitar (especially on “Falling Sun” and “Epsilon”) manages to give other elements of their sound some substance as well. Transitions from dreamy to the shoegaze sections make this album a worthwhile listen and add weight to the more earnest guitar playing. If the band can drop the attempt at being evocative through ambiguity, their next album could be killer. 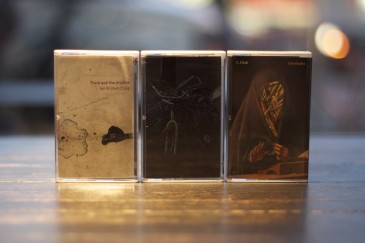