PUP kicked off the night with some standard, high-energy punk-rock. This band had great stage presence with lots of energy demonstrated by jumps from the drum stand and vigorous headbanging. They showed their versatility and slowed it down with “Yukon,” a laid-back but intense song with instrumentals that wouldn’t be out of place in a big rock stadium in the ‘70s. “Reservoir” quickly brought the sound back up, featuring a grinding, thumping intro and chanting backup vocals. Besides their excellent stage presence, I also enjoyed the smooth transitions between songs.

The crowd was pumped and ready for Hollerado, an indie pop-punk band from the suburbs of Ottawa. During the set change, a giant “HOLLERADO” banner was strung, which I thought was a little much, but it all made sense once the black light hit. The banner, along with all their other equipment and instruments, were hand painted with swirls, planets and stars.

Foam snow, confetti, and streamers punctuated their performance of crowd favourites like “Good Day at the Races,” “Juliette,” and “Pick Me Up.” Their music was danceable, but I found nothing unique in their overall happy, radio-friendly sound. Lead singer Menno Versteeg had great crowd interaction though, going right to the edge of the stage while performing and took breaks to tell anecdotal stories like how his pierogi-making Polish grandparents wash and reuse empty chip bags. Later, he shared the story behind “So It Goes,” a song about his Dutch grandfather who was captured during WWII, but whose life was spared by a Nazi officer. As great as Hollerado’s performance was, I found their stories and stage effects more memorable than their music.

Taking the stage around 11:30 p.m., Zach Gray walked out with bandmate Tom Dobrzanski and three accompanying musicians, wearing a big grey circle scarf that everyone commented on. They eased into their Ancient Mars dominated set with the slower, drawn out “In Heaven.”

Of course everyone’s hands were up during “Observatory”’s line: “Hands in the air,” but what really got the crowd going was “Ancient Mars.” Grey allowed the song to fade out with the audience singing “Oh oh oh my ancient mars,” while during the end of “Strange Girl,” he led the crowd in an irregular clapping rhythm and praised his hometown for picking it up.

Oddly enough, a scuffle broke out in the front. Grey called for a “vibe change” and urged the crowd to kiss their neighbours and chuckled as a smashed blonde chick was escorted out. Later, he went on to thank the fans for the support that resulted in getting them here to the Commodore, a venue they’ve never played — surprising, given that they are veterans in the Vancouver music scene.

For the finish, Grey descended into the crowd for an intimate, liquid-voiced performance of “Escape Artist” while at the same time posing with fan selfies. For their encore, they played “Cold Moon,” utilizing Hollerado’s leftover snow and closed with their most well-known, dynamic song, “You’re Too Cool.”

The state of the ballroom floor at the show’s end — bottles, glasses, streamers, confetti, foam, and booze covering almost every inch — was proof enough of how great of a party the show was. 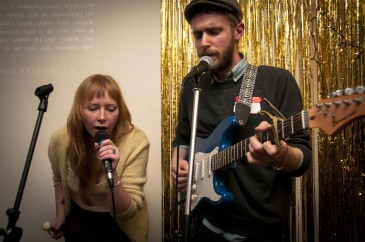 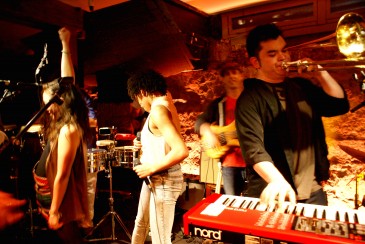