On July 22 at the mighty Biltmore, the nerd punks were out in full force, toting backpacks, art degrees and a fair bit of attitude. Nü Sensae, White Lung, the Audacity and Mika Miko rip-roared their way into a bunch of kids’ hearts with their intelligent brand of yappy punk rock madness. The room was full, the crowd was pumped and there was an element of sex in the air. Whether it was the cute, awkward girls fronting intimidating bands or the attractive couple in the corner dry humping their way through the evening, this night was shit hot!

I arrived just in time for White Lung’s set, which was short, loud and punchy as hell. The fringe-haired waif belting out lyrics appeared coolly detached, and her band was poised to set the place ablaze. I didn’t understand a word, but it still got me sugary and ready for some headliner—but not before the Audacity from California took the stage with an interesting stew of garage rock, punk and jacked-up pop. They played tight jams that got the crowd surfing and plastered a stupid grin on my face with their cute young boy antics. If I was a girl I’d be screaming “Dreamy!” and calling it a night, but I was there for Mika Miko, who pretty much destroyed!

The dense crowd was bubbling and popping everywhere and the band was on fire. Playing few older songs and a host of tracks from their latest disc, We Be Xuxa, these Cali kids delivered. Though Pitchfork approval has painted a thin coat of rock star pink on Mika Miko, and some lineup changes have shifted the energy level and overall tightness of the band, it didn’t stop them from rocking, sassing and whipping the crowd into happy submission. I’d say it was a job well done! 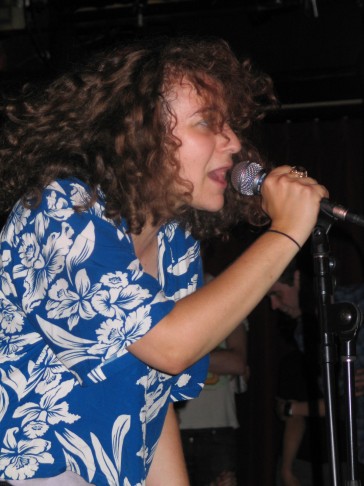