My memories of the 1980s are foggy at best. Though I’m practically a senior citizen of the decade, all of eight years old in ’85, I still can’t remember much more then big bangs, Michael J. Fox, crew-neck sweaters and my trusty Atari. In fact, I would go so far as to describe the whole decade as “the Atari years”: a time of sights and sounds that were simple, jagged, space age, radioactive and downright weird. If pressed to summarize, the Atari years could be described as a time of bleeps and dots. 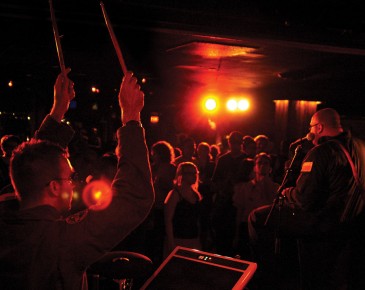 Now, why do I spiral into this strange fit of tech-nostalgia? Because I find myself at the Biltmore watching Vancouver’s Go Ghetto Tiger, whose music puts my brain to bleeps-and-dots mode. This three-piece maxes out the weirdometer; from outfit choice to instruments, they really are a piece of work. MarQuo B sings lead and plays bass, and is backed by Jason Quirk on an electronic drum kit and Super J on the keyboard. The three appear on stage in assorted military coveralls, á la Top Gun.

And then there are the stage antics. While MarQuo and Super J show us their latest robotic dance moves, Quirk dramatically pauses between drum beats to hold a single drumstick to the sky. Between songs MarQuo keeps the crowd occupied with unconventional banter, telling them that he knew they were wondering if he “has sex like he plays bass.” (How did he know?) He also tells them that it’s GGT’s last show ever, only to reveal that this is completely fictional a few songs later.

Nobody could accuse these guys of lacking in personality. Their electric synth rhythms set a dance party going that would mobilize even the stiffest of butts. Wrapping nicely into spacey organ melodies, the techie sounds march your mind through an inter-dimensional journey, seasoned with heavy effects that can only be described as maximum Atari.

Eighties revivalists are a dime a dozen, but Go Ghetto Tiger stands out. Maybe it’s the use of interesting space age musical effects. Perhaps it’s because they aren’t just putting us on for fad’s sake—they just have a good time being their unusual selves. Whatever the reason, GGT brings uniqueness to the stage that at the very least scores off the charts on the weirdometer, the techometer and 100 per cent bona fide bleeps and dots. Seeing GGT at the Biltmore was something special—or maybe someone slipped a hallucinogenic substance into my drink. Let’s hope it was the former!