I watch skyscrapers gobble up the sun before I walk into Horses Records on one of the summer’s last warm sunsets. The Hastings-Sunrise record shop is closing up for the evening, but we were just about to get into the groove. Co-owner and operator Lt. Frank Dickens was tearing down for the evening. I lounge on the shop’s infamous yellow sofa as I get my gear ready; Dickens tidies up the odds and ends before finding some mood music on Youtube.

Moanin’ in the Moonlight, the debut album of the legendary Howlin’ Wolf, starts playing on the store’s speakers.

“It’s the same one we have on the wall,” he says, as I notice that the album is sitting on display beside a row of other freshly sealed records. 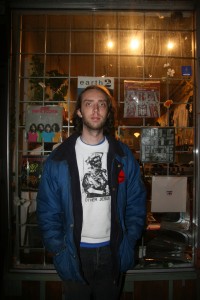 Howling Wolf is just one of the many legendary musicians Dickens has stocked in his eclectic music and poetry shop, but now he has his own album attached to the list. Dickens recently finished recording his debut solo album Sunburned. The new tape marks his first departure from Peace, a Vancouver rock/post-punk band that Dickens has been a part of for more or less the past decade, only now he felt it was time to hone into his own sound.

“[Peace is] a pretty egalitarian kind of band where everybody contributes their thing and the sound that results from that is the sound of the band,” says Dickens. “This was an opportunity to focus in on just my part of that.”

Much of Sunburned seems like an extraction of Dickens’ role with Peace. But Sunburned is much softer, as Dickens’ smooth and low-toned vocals carry the album, often accompanied by acoustic guitar melodies and even violin.

“I had a bunch of goals going in, and the sound of it is, but at the same time I wanted to just let it happen. To a certain extent I’m just hoping that my influences come out naturally,” says Dickens. “When I play in a band I’m hoping to collaborate, but with that comes a bit of compromise. But when you do something on your own you can do something that has a really unique perspective, which is one of the things I like the most about music.”

One aspect that sets Sunburned apart from Dickens work with Peace is the use of percussion. Dickens only used a pair of floor toms and a snare throughout the album. Aside from one lonely song, cymbals are absent.

“I like the kind of sense of space that [the percussion] gives the music, when you don’t have a cymbal keeping time,” says Dickens, “it just kind of feels more open.” 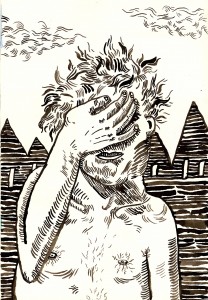 But perhaps what makes this album most unique is that it’s the first record to be produced under the Horses Records label.

“[Releasing an album under Horses Records] was always somewhere in the back of mind,” says Dickens, who will assess the success of this release before working towards another release under the label. “I think that I’m kind of attempting to combine everything I like into one thing. To me, the ultimate dream would be to release my music through my store, have the store going, and release other music that I like while continuing to produce music. I feel pretty happy just being immersed in the things that I’m interested in—just being surrounded by my obsession.”

Dickens’ ‘obsession’ has undoubtedly led to one of the most unique record shops in the city. Horses Records has been open for over a year now under the pretense of being a record shop with a very open and diverse attitude towards music. “I think a record store should be a place where people’s strange ideas are allowed to flourish and develop, for them as people or musicians or artists or just human beings,” says Dickens.

The store not only acts as a celebration of music, but as a celebration of art. Paintings on the walls don’t just add an aesthetic flare that many of the city’s shops are lacking, but also highlight the notion that each and every record in store is art in and of itself, from the literal cover art to the music engraved on all sides. The store doubles as a bookstore — err, poetry store — a feature that can likely be traced back Dickens love for words and literature. 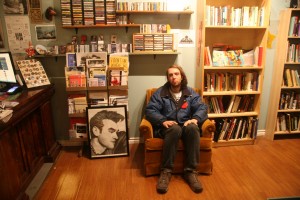 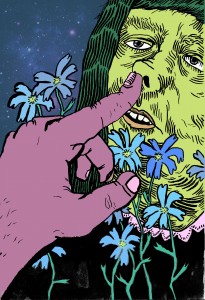 “In my music and in the store, one of the most inspiring things for me as a listener, is the combination of words and music as forms of communication and as things that have a kind of infinite potential, and an explosive potential,” he tells me. “Music can go beyond music. It can be something that you take into your life, and it can change you and it can change your ideas about the world. I like music that does that. I’m looking for music that will change me. And I like to walk away with concrete ideas, which is why I like lyrics so much.”

Dickens often refers to his poetry and songwriting as two separate forms of expression, but when listening to his music, it’s easy to notice how the two intersect. In the climax of the track ‘Losing What I Had,’ Dickens digresses to spoken word. A separate vocal track of his own singing rolls on over top, creating a unique juxtaposition that reflects and highlights the artist’s two passions.

And much like many great writers and poets, Dickens writes and performs his music under a pen name to preserve his identity.  He’s probably not a lieutenant (although I’ll admit, I never asked if he was), and if you’re really curious about his actual name, a quick skim through some old Discorder articles will likely yield the answer you’re looking for. But it might be easier to go into Horses and ask him yourself— just make sure you leave with a copy of his new album.

Sunburned’s official release party was September 24, although the cassette is available for purchase at Horses Records or listen on Soundcloud.