Rose Melberg may have told her audience that “this is a small show for a small record,” but it definitely had a big heart. The evening started off with Melberg and a special guest serenading early arrivals with a ukulele. The sweet island melodies assured that smiles were placed on faces. Next, Aunts & Uncles took to the stage to play a potent blend of indie rock and chamber pop. The four-piece brought an amazingly full sound to such a small space with delicate interplay between strings, guitar, xylophone and drums.<!–more–>

Olympia’s Angelo Spencer next took listeners out of the gallery and “into the desert” through a set of extended surf jams that would have made Link Wray proud. Spencer brought a playful, relaxed vibe to the stage and even managed to get some of his mostly seated audience up and dancing.

The last dance, so to speak, was saved for Ms. Rose Melberg, for whom this record release party was thrown (Homemade Ship, out now on K records). Several guests joined Melberg onstage, including members of Aunts & Uncles and Apollo Ghost’s Adrian Teacher for a heartfelt rendition of “Each New Day.” The ever-talented Larissa Loyva (Kellarissa) joined her for the duration of the set, and for several songs she had a very special guest: Rose’s mom. Melberg played a soft acoustic set (her songs are quieter now to keep her son from waking) delivered with tender vulnerability. This vulnerability was definitely felt on one of the evening’s most affecting numbers, a cover of Roy Acuff’s “Blue Eyes Crying in the Rain” performed by Melberg, her mother and Loyva. There was an undeniable sweetness to this mellow evening, one that won’t soon be forgotten despite it only being a “small show.” 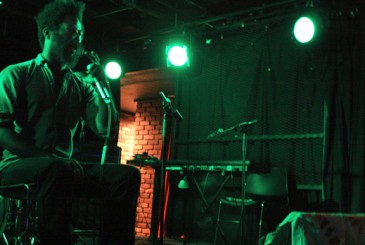