Starting at a little past midnight Vancouver’s own Eldorado at the Railway Club played a late show. The evening kicked off with a look at the band’s new video, and while it was good, the crowd was there to watch them play. Everyone was polite, but eager for the show to get started.

Eldorado plays a mix of southern blues and country, very smooth and easy to listen to—it makes your toe start tapping involuntarily. Sitting to the side of the stage was Michael Flunkert on slide guitar. Rather than mugging for the audience, he was happy to let his musicianship do the talking. His guitar formed the backbone of the sound, while Julie Bavalis’ bass thumped away enthusiastically in the background. But it was clear from the first song the two stars of the show would be Angela Fama and Nen Jelicic. Jelicic takes most of the focus by default: he towers over his bandmates, swaying with his guitar, and tops it all off with a cowboy hat without seeming cheesy—he has the stage presence to pull it off—and lead vocalist Angela Fama is cute, cute, cute! She has a velvety-soft voice with a beautiful bass undertone that dripped aural sugar on the audience all night.

Eldorado play evocative music with a cinematic quality to it; reminiscent of the Cowboy Junkies and Mazzy Star, there isn’t anything new or innovative about them. But they are pure pleasure to listen to. Earthy and sweet, like honey for the ears, every song is delivered with humour and a smile—even the sad songs don’t sound that sad. 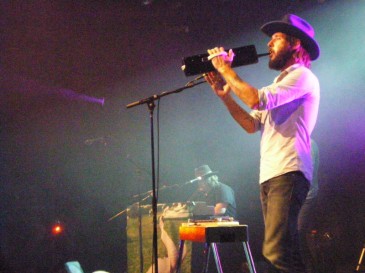