When I arrived at Blim, the back of the gallery’s retail space had seats for maybe twenty-five people, half of which were filled. Audience members mingled and at some point, one of them went up to the front of the room and started playing with the sequencers and keyboards up front.

It turns out this guy was the first act. His set started with about ten minutes of undulating cosmic static, which eventually resolved itself into a four-to-the-floor beat before dissolving into abysmal, echoing tones. By the time the first act – we later learned he was called Cloudface – was over, I couldn’t wait to get outside and stretch my legs. Maybe the music I had just listened to was incredibly complex. Maybe it was a sweat-and-blood effort. I couldn’t tell. I could neither locate it within a musical tradition, nor could I summon up an emotional reaction to Cloudface’s efforts.

Next was Connect_icut’s distant space transmissions, shimmering clear tones and heartbeat rhythm. Behind the performer, a projection screen looped video of a small white dog playing on a snowy mountain. The footage doubled and quartered into mirroring images that pulsed with the music. Combined effect of music and visuals: vaguely spiritual, perhaps entheogenic.

No UFOs’ musical stylings echoed Cloudface’s, leaving me similarly anxious to leave the building. Fieldhead’s set followed, backed by grainy black-and-white footage shot through the window of a moving train. Low-income housing, skeletal trees and raindrops running down the pane perfectly paired with wistful acoustic guitar loops, building to a climax that recalled Godspeed You! Black Emperor. The bleakness made it my favourite piece of the evening.

The show closed with Secret Pyramids’ own brand of swirling electronic psych, which could have been incredible had I been very, very stoned. This was music that appealed to a tiny segment of the population and didn’t make an effort to gain any new listeners.

Showing up at Blim was like entering a speakeasy: All the lights were off, the front door was closed and patrons were identifiable from the street only as moving shadows at the back of the room. Connect_icut alone made an effort to identify himself to the audience, while the others all seemed oblivious to the rest of the people in the room. To hardcore fans and friends of the performers, I’m sure it was a lovely way to spend a Friday night. But after three hours of the above proceedings, I was glad to leave. 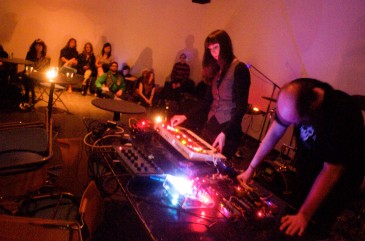