Tying in with our editorial on Ache Records Tenth Anniversary is a Q&A with the founder of Ache Records, Andy Dixon.

Discorder: Hi Andy, this is Andrew Wilson from the Discorder. How’s the ten year anniversary going?

Andy Dixon: Very busy! It’s hard to tell locally how everything is doing, but the mail order is going really well. It’s hard to keep up.

D: So according to your website, one way to tell Ache’s history has it at 12 years old instead of ten. Can you tell me more about that?

AD: Yeah. We don’t count it but the “first” release was for Hooray for Everything. I was 19 or 20 and it started out as a side project. It was a band that me and Zoë [Verkuylen, my girlfriend], Greg Adams [from the Self Esteem project] and a drummer called Clayton started at the height of the ‘90s emo scene. We released the album ourselves [on what would later become Ache]. The band was very short lived though. We only released like ten cds.

D: Do you do all the art for the albums that Ache releases?

AD: I do art for most of them. Sometimes there are artists in the band or a friend of one of the members, so in that case they would do their own art.

D: I also saw on your site that you had a book of compiled artwork for sale.

AD: The book is a design book with some older projects based on Ache covers. Mainly just 100 original pieces.

D: How do you think the music scene in Vancouver is going?

AD: I don’t really have the perspective of someone within the business side. I feel like I’ve never penetrated that sphere, which was a goal of mine, so mission accomplished. I am a musician and artist first and I don’t want to know the business side of it, so I avoid it. I try to be anti-business about it. I want to avoid playing the game, shameless promotion, paying for reviews and good press.

D: And how do you feel about Vancouver as a musician?

AD: I love the scene—fantastic and diverse. Lots of interesting music. And there is a sense of camaraderie within different art forms. For example, I went to an art show of a friend and at the gallery was a hardcore punk band on one stage and a noise band on another. Lots of cross pollination.

D: How do you feel about how Ache is doing after 10 years?

AD: It feels very… it’s hard to believe, actually. It’s amazing how much time passes. There was never any estimate or expectation on the lifespan of the Ache label. I feel like it’s “just happening.” It’s been happening organically—very fluid ten year course with an acceptable sales-to-debt ratio [laughs]. I’m proud to have helped share music with people. I just release what I think should be heard. When I hear a band that I like and needs a label, a band that has something to say, I want to help spread that to people.

AD: I honestly don’t feel like I run a label. A couple of my friends and I started a video store and we are prepping for it like mad and working on sustaining it for success. That feels like I’m working but with Ache it’s like “Oh, this might be my last release” but then something falls into my lap and it feels like something I need to be involved in. This is a pursuit of passion. I don’t make money with Ache. There’s much more ebb than flow cash wise and what I do make, goes back into the label to improve it.

D: Well thank you for your time. I wish you the best of luck with the anniversary and with Ache’s future.

AD: No problem. Happy to help. 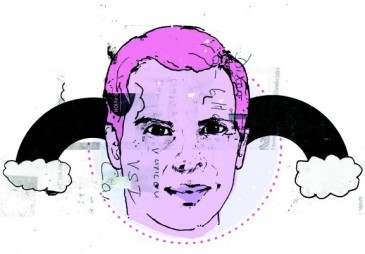