I go to Shindig for the heckling. The catcalls, the boos, the barrage of noise that host Ben Lai deflects from the stage with his wry grin, as he postpones the announcement of the winners until we’re scratching the tables with fury. [ed. I’m certain Ben enjoys this.] To my surprise, this week’s judges propelled Lengthy List of Lovers into the semi-finals. Reminding me of Eagle vs. Shark, this duo sported pop synthesizer and guitar, with occasional electronic blips and distortion. Clad in a foxy red slip and curious hat resembling a wimple, the lead singer (emanating a softer, hazier Lily Fawn) sang slow ambling melodies to sprightly pop grooves, while the guitarist (sporting shiny silver chainmail-esque shirt) chimed in. This awkward looking pair presented an amusing and entertaining set, although the songs lacked focus and melodies dragged.

The best set of the night was Tigerhead, a quartet of underage men who rocked out like Tortoise. This four-piece instrumental, with occasional vocals for effect, fashioned songs that closed people’s mouths and turned eyes to the stage. Technically proficient, the band produced evolving layers of rhythm and sound that captured interest and ended well before necessary. Check out Tigerhead under their new name, Flash Palace. My second goes to singer-songwriter Jody Glenham, who treated us to well-crafted songs and a voice like a rich cream ale. A host of backing musicians filled out the sound, and left punctuated spaces for Glenham’s voice to soar through.

The judges’ ruling left me in stunned silence, and I combed through my recollections of the evening, looking for memories of people in dark corners scrawling on white pieces of paper. Boo! Rubbish! I heckle these judges on the public pages of Discorder, and encourage you to pit your musical opinion against Shindig’s esteemed experts at the Railway Club next Tuesday! 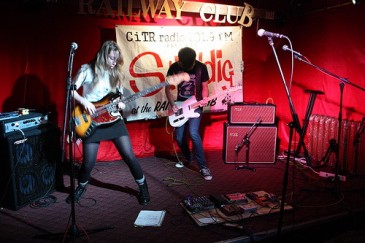