Four of Vancouver’s premier bands—Fake Shark-Real Zombie!, Adjective, the Good News and Junior Major—released a collaborative album on Oct. 17, and the ensuing album-release show can best be compared to the Celebration of Light. Except instead of fireworks spraying across the sky, it was beer spraying across the audience. There was no shortage of energy (or beer, apparently) at the Rickshaw theatre, with all four bands appearing genuinely excited by their project. Quadruple Dare – Vancouver Mutilation is an LP with a limited release of 500, on which the bands cover each other’s material. At the release party, the groups drew straws to determine set times. The result was a show bookended by great performances, with Junior Major opening, followed by Fake Shark-Real Zombie! and Adjective, and closing with the Good News. The evening played like a girl with a beautiful face and ass like Beyonce’s, but midriff that could use a few sit-ups.

If Junior Major’s performance were to take the shape of a female face, it would look like baritone guitarist Katy Horsley: that is, stunning. Unfortunately, the Quadruple Dare release party was her last show, although she’ll be sticking around for another month or so to finish their latest album. Horsley gave a powerful, enthusiastic and sentimental final performance, proving she will be tough to replace.

Fake Shark-Real Zombie! and Adjective followed, and neither band was able to live up to Junior Major’s impressive opening. Fake Shark gave a tight, vigorous and well-rehearsed performance, but came off a little dated. At the spectacular 2007 release party for Zebra! Zebra!, front man Kevin Maher was current, exciting and had all the girls angling for a make-out. While no longer cutting edge, Maher did prove Fake Shark still wields sharp musical teeth, and can attract a crowd.

Adjective gave a solid, unremarkable performance. The sound quality was generally excellent throughout the evening, with the fine acoustics of the Rickshaw. Adjective, however, was slightly too loud. Bassist/vocalist Dustin John Bromley was a bright spot in the set, demonstrating, as per usual, charisma and charm on stage.

The Good News closed the evening, with the assistance of many of the other performers who came on stage (or sang from the floor) as the show progressed. Bromley, performing once again, dropped his pants in celebration of the occasion. The enjoyment of the musicians was palpable, and one can only imagine the great time they had recording the album—in all likelihood, the studio, much like this show, was drenched in beer spray. 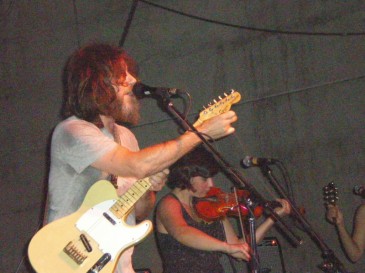