“I was surprised that you wanted to talk to us about our gear, because we don’t even really use much gear,” Jay Arner commented as he showed us the home recording studio on the upper floor of the house he shares with bandmate Megan McDonald. But Fine Mist’s minimalist approach toward the creation and performance of their wonderful synth-pop jams is pretty unique and fascinating.

Arner composes the majority of the songs on the computer, which is the central part of Fine Mist’s recording studio. He uses Samplitude, an audio editing and recording program similar to ProTools or Ableton. “Both Meg and I come from an analogue background, and I had a four-track when I was younger, and basically I just use [Samplitude] like a multi-track,” said Arner.

Arner has also used this home studio to record a number of other bands, such as Basketball, Mount Eerie and Shane Turner Overdrive (check out Arner’s recording studio website at tonehenge.tumblr.com). He has a keen ear for production, and claimed he’s “trying to find that middle ground between New Order and Mariah Carey” on the almost-completed Fine Mist album.

“When we perform live, we’re using the pre-recorded backing tracks on an iPod,” explained Arner. ” We just mute the vocals, and then I figure out which part I want to play live on the MicroKORG, and we just mute that. So then you’ve got a backing track and I just turn it into a .WAV file.”
So when Fine Mist performs, Arner plays on the KORG and sings harmonies and McDonald sings lead while the tracks they’ve written and recorded play on a regular, standard iPod. And that’s it.

A lot of musicians develop a fetishistic desire for instruments and gear, but Arner prefers to focus on the songwriting. “That’s something that I try to avoid, that lust for more stuff. You can just get sucked into that, and then you’re not making songs cause you’re busy being like, ‘Oh! Check out this tone!’”

All Fine Mist require for a show is the iPod and KORG (“We can play a show any place, any time!” Arner claimed.) [ed. Someone should put this to the test.] However, a quick look around the studio reveals guitars, basses, and other instruments, betraying Arner and McDonald’s history of playing together over the years in a number of local projects with more traditional “rock bands,” such as Poison Dart and International Falls. “Fine Mist started as a sort of vacation from International Falls. And that was where the minimal thing sort of comes from, because we don’t want want to lift drums to every show, and we don’t want to worry about amps dying … We take a taxi to shows. Fine Mist doesn’t drive,” he laughed. “We’re responsible.”

That brings up another important instrument in their live show: the ever-present glass in Arner’s hand. “It’s chardonnay,” he said with a smile. “Fine Mist doesn’t do Riesling.” 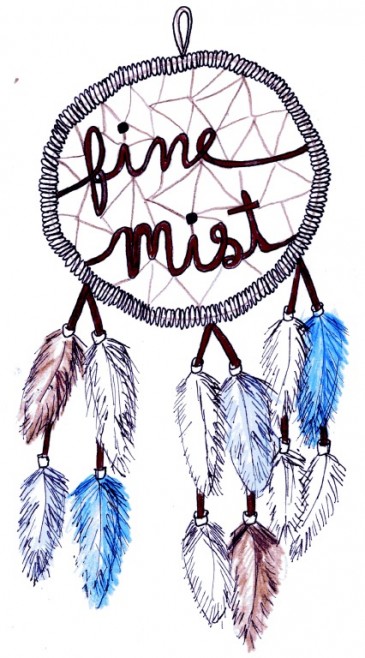