If you’ve walked down Granville Street on a Saturday night within the last year, there is a good chance that you’ve already met Daniel Benjamin Buxton. And chances are you weren’t walking when you passed him: you were probably shaking or shimmying. It’s obvious to even the most obscenely drunk passerby that he didn’t start playing yesterday. DB Buxton is an Edmonton institution, having spent over a decade of shivery winters on the street earning his living and his stripes strumming his heart away. Edmonton’s loss is Vancouver’s gain as he has recently chased his dreams from Dirt City to Rain City and his loyal fans are looking forward to seeing Canada’s premier bluesman collecting his comeuppance. With new management and a new solo album on the horizon in the new year, Discorder photographer Robert Fougere caught up with DB Buxton for a quick sit down.

Discorder: What’s your motivation for playing on the street?

DB Buxton: I started doing it when I was really young and it really was just survival. I didn’t do it because I thought it was particularly cool or fun.

D: Why do you think more talented musicians don’t busk?

DBB: Because it’s horrifying! It’s awful. It’s so painful. If you don’t care about music it’s easy to do.

D: What do you think is the friendliest Canadian city for busking?

DBB: I would say a place like Toronto or Montreal treat me the best, but that’s because I’ve been doing it so long. I’m so good at doing it, but if I was bad, I’m sure I’d do really terrible. Toronto is a place where if you’re really good, people will appreciate it and they will step outside of their boundaries to show you they appreciate it. Vancouver, by contrast, is not like that. People are nicer. They’re on average more arty, more cultured, but they’re also more standoffish. When I’m busking here, I mean, I really have to work crowds hard because people will not exit their zones: they’re shyer people.

D: How much do you hate playing for drunks?

DBB: When I was young, I didn’t use to do any drugs or drink. In my early teens I was kind of wild, but in my later teens I was trying to be super serious about life and at that time it really did depress me and I really kind of hated mankind a lot. You see the worst of people all the time and it makes you bitter. As I got older I realized part of that was my fault. I was elevating myself in my mind as being this genius who has no opportunity or is stuck in this shitty situation and I realized I was kind of on my own high horse and realized I had to stop hating on people and relax and understand that this is life. This is where I’m at. If you’re gonna be an artist, you have to be true to reality, with where you’re at. Good songs are written by responding honestly to what’s going on around you and to respond honestly you have to be part of what’s going on around you.

DBB: In my early 20s I was completely obsessed. I was so sure that I was gonna be the next Prince or David Bowie or something like that. I was very conscious of these things. When I would do my posters, when I would do anything, it was about creating that image for myself: something that I thought really stood out. What I didn’t realize at the time was that I was just throwing that out into nowhere. There was no sense of context. I just felt that if I act like that, if I present myself like I’m going to be a star, it would just happen. It’ll line up. In Edmonton, that can’t be true. I kind of retreated from that because I took that about as far as I could within that context.

D: I’ve read in your bio that you feel as though you’re slowly stumbling towards success. What’s your idea of success?

DBB: I would define success for myself as finding my audience, you know, that exists out there in the world but currently doesn’t know who I am. But they’re out there, whoever they are. That’s number one. Number two is being able to have the power to do things the way that I want to be able to do them. I wouldn’t define it as having a bunch of money in my pockets or being famous. Although I’m not anti-those things! 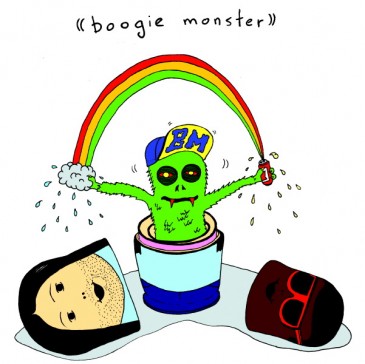