When local band Brasstronaut’s Old World Lies debut EP landed in 2008, it instantly became clear that they were something special. They’d found a weird and great intersection between jazz, rock and classical themes, and nobody else sounded quite like them. Most bands would be content to keep the same sound for a while after only one EP, but Wednesday’s show at the Biltmore showed that Brasstronaut keeps pushing forward.

Openers An Horse, a duo from Brisbane, had the task of warming the crowd up. No small task at a show with plenty of bearded jazz enthusiasts, but they managed to pull it off somehow. Think catchy guitar-driven pop reminiscent of Dog Day or Tegan & Sara. A few of their songs sounded nearly identical, but that seems to be par for the course in the unforgiving world of power pop.

Soon after, Brasstronaut hit the stage with plenty of new material. To be honest, the new songs blew me away. I was expecting more gloomy, jazzy tunes to keep me company during any future breakups. Instead, Brasstronaut played multiple energetic art-rock songs that still managed to retain hints of their old sound. If the Unicorns reunited and picked up some brass and woodwind musicians, they’d sound something like this. A few new songs were more sedated like the Old World Lies EP, but it was the new sound that really stuck in my head.

Brasstronaut also tried applying their newfound energy to some old tunes, with mixed results. “Old World Lies” felt awkward with prominent bass guitar and drums, but some extra drive for the climax of “Requiem for a Scene” worked wonders.

This show was originally supposed to be a release party for Brasstronaut’s debut LP, but that’s since been delayed—a bit disappointing, but it looks like the album will be well worth the wait. 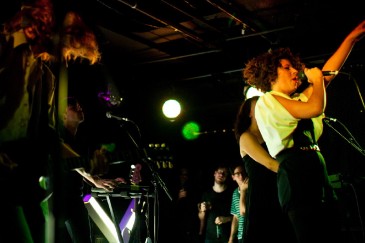