On a recent visit to New York City I stood across the street from 315 Bowery Ave, my camera poised at the dilapidated building across the road, trying to capture a snapshot of the most celebrated music venue in American music history. CBGB’s, sandwiched between Manhattan’s Lower East Side and East Village, has been hailed as the birthplace of American punk rock, kick starting the careers of Television, The Ramones, Patti Smith, Blondie and countless others. Since then the club has hosted such diverse acts as The Police, Guns N Roses, Yo La Tengo, PJ Harvey, and Sleater Kinney. But 32 years after the club opened its doors it is now threatened with the possibility of having to close them permanently.

The future of CBGB’s—which sands for Country Bluegrass and Blues—has been uncertain since July, when the club found out that its landlord, The Bowery Residents Committee (BRC) would not be renewing CBGB’s upcoming lease. The BRC is a non-profit organization that provides services for marginalized people, and operates a homeless shelter above CBGB’s.

It has been unclear why the BRC has decided not to renew the club’s lease, granted the longstanding relationship between CBGB’s and the organization. Early online speculation by bloggers about the club owing thousands of dollars in back rent proved faulty when a Manhattan judge ruled on August 10th that
CBGB’s did not owe any back rent to the BRC. The judge even cited CBGB’s as “a major cultural institution” confirming the importance of the club to New- York’s cultural history.

But sometimes even appraisal from a judge isn’t enough to save a fl oundering punk club and, as expected, CBGB’s received its notice of eviction from the BRC on September 7th. The notice followed public outcry from music fans across the world who heard about the possibility of the demise ot the club.
Hundreds of supporters of CBGB’s held a rally in Washington Square Park in Manhattan on August 31st where artists such as Blondie, The Bouncing Souls, and Gavin Rossdale came out to show their support for keeping CBGB’s alive. CBGB’s fans have also been active on the web, networking worldwide and setting up numerous blogs and campaigns to save the club, including a letter writing campaign to NYC mayor Michael Bloomberg.

Few people would deny that CBGB’s has played a significant role in punk rock history. Most people would agree that the influence of the club and the artists it showcased has spread beyond the five boroughs and across the world. The club has inspired not only those who have been pushed around in a CBGB’s
mosh pit, but those who have been influenced by the music and punk attitude that the club is famous for.

Shawn Gabel, who plays guitar for the local Vancouver punk band Born of Ashes speaks of CBGB’s as the “epicenter of the punk and hardcore movement,” although he has never visited the club. “CBGB’s is where all the good bands on the East Coast try to play and where all the bands on the other coast wish they could play,” Gabel muses.

Cultural sociologist Dr. Donna Gaines says that CBGB’s provides an important social space for youth that is essential for alternative cultural development in cities. “CBGB’s is a Mecca for many young people world-wide, who feel cut out of mainstream culture,” Dr. Gaines explains, “ (it’s) a place to celebrate
and engage in meaningful social production and process.” Dr. Gaines says that alternative cultural and artistic spaces such as CBGB’s have been forced to close down in recent years and move outside of Manhattan due to increasing rents and gentrification of Manhattan neighbourhoods. She hopes that CBGB’s won’t suffer the same fate.

However, despite the overt support for CBGB’s and the club’s historical and social significance, the looming eviction raises questions about the current musical significance of the club. Some argue that CBGB’s has lost its prominent position within the current NYC music scene and that it really only remains a distant memory of cultural greatness.

“CBGB’s is no longer part of the (NYC) music and arts scene,” Brooklyn-based musician Tim Williams says. Although he has played at the club himself he notes that today’s bands want to play The Mercury Lounge and other venues in New York’s trendy Lower East Side district. “Closing CBGB’s is Williams compares, “you can remember when things were great but at this point you know it’s for the better.”

Although CBGB’s future on the Bowery remains uncertain, several rumors of its fate have been spreading through online blogs and message boards. One such speculation is that the club may be moved to Las Vegas, although this rumor has not been confirmed by anyone at CBGB’s. Another possibility is
moving the club to another New York location. However, these possibilities have been criticized as ruining the essence of the club, defeating the purpose of keeping the club open at all. “The only place CBGB’s should be relocated to is the Rock and Roll Hall of Fame,” Williams says, “Moving it anywhere else would not only cheapen the history of the place but also how we think about the bands that played there.”

For now though, fans and critics of the club must wait as CBGB’s challenges its eviction notice in court within the next few months. While the club refused to comment on the current proceedings of the case, CBGB’s remains lease-less but open for business—defiant in their right to rock—like so many of the bands the club catapulted to fame. 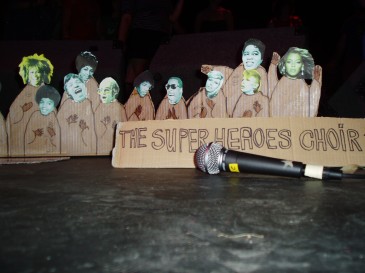