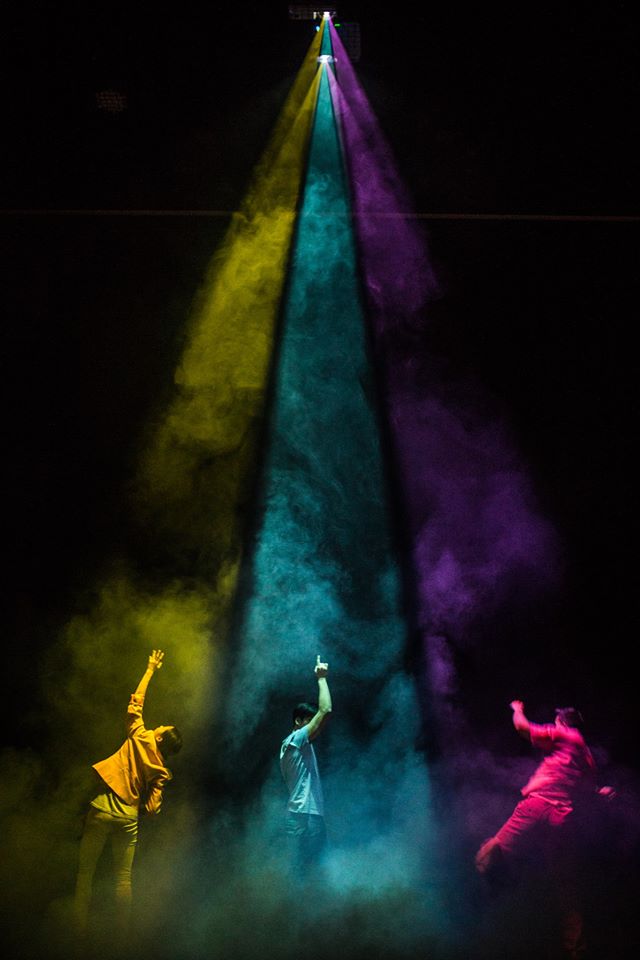 “Room 2048 (2048號房) — a dream machine for the Cantonese diaspora. In digital light and smoke, we pursue a history that is not ours. A living past, a dying future, and a stillborn present. We will lie. We will cheat. We will spend a thousand years here.”

Preliminarily, it’s worth mentioning that Room 2048 derives the number 2048 from the year when China plans to fully reintegrate the former English colony, Hong Kong, into the People’s Republic of China. Already, exertions into the liberal-democratic city-state by an increasingly firm Chinese government have been met with protest; but also a creeping sense of malaise and inevitability.

But Hong Kong was always a dream: a Shangri-La of rampant neoliberalism and English colonialism. Could it ever have been utopic? In light of this complexity, Room 2048’s dreamlike dissidence — lying, cheating, idling — is charged with a laconic bravura. A multidisciplinary dance performance, the success of Room 2048 comes from equal emphasis placed on the conceptual prowess of Hong Kong Exile (Natalie Tin Yin Gan, Milton Lim, Remy Siu), characteristic performances from dancers Michelle Lui, Milton Lim, Alex Tam, and surreal FX from Remy Siu. Room 2048 is clever and technical, bracingly smart, and as content to impress as it is to make you experience slowness and unease.

There’s a characteristic gesture in Room 2048. Hyperkinetic pop plays over the speakers. A spotlight animates a central figure. Lights flash on and off, in varying tempos. In the opening sequence, Lui, upright and expressionless, swivels to face another direction when the dark strikes: as if she was entirely still and the audience’s view was that of a perspective snapshot. Later, Tam will assume the central position: staccato lights flicker as Tam, running in place, rotates so subtly it appears as if he’s on a swivelling platform. Room 2048 presents illusions and tricks that double as questions: perhaps it’s a question of movement without progress, or action without reaction. Room 2048 has a sense for dream logic, from the surreal to the outright comic (during a strip-tease sequence, Tam removes what must easily be at least 5 sets of boxers).

The fog inundates every inch of Room 2048. Masterful sound design during club sequences, switching between the thick of the dance floor and muffled bass floors away, compress separate space into the single level of a stage. In another sequence, Lim clumsily emulates Lui’s moves, failing to replicate the sharp gestures so reminiscent of Remy Liu’s own decisive light-play: as if lagging behind technologic ideation, a dream of teleology that becomes a nightmare.

At one point, Tam makes himself present, the narrator assuming central stage and a bathetic purpose. He talks about his grandfather’s experience of diaspora, the complex path to today, and their time spent together with karaoke. Tam — or the character he plays — sings Sinatra’s “My Way.” “Regrets, I’ve had a few / But then again, too few to mention.” The refrain comes across like the cry of Nashville’s American bicentennial song — “We must be doing something right / To last 200 years.” Like Altman’s film, Room 2048 has a knack for irony, bathos, and a complex love in its depiction of the homeland.

Later, in a moment of stillness and beauty, illuminated fog drapes the stage, like a basin of vaporous cloud in a Taoist painting. Thousands of days pass. After hyperkinetic light and sound, stillness is the centrepiece of Room 2048’s final act. Trickery, which has been a game of resistance for the dancers, concludes with an act which makes the formal performance and the expectations of genre itself a dissident no.

As the play concludes, it recurs. After the recursion, it ends as a matter of the outside world of closing venues: rhythms apart from dream logic. Tam rotates around the stage in that characteristic shuffle, so subtle it appears as if the base is rotating a still subject: like the hung screen of a video game selection menu. Maybe it’s like Elon Musk says: all sufficiently advanced civilizations avoid apocalypse by plugging themselves into simulations. Maybe Hong Kong exiles will plug themselves into a Wong Kar-Wai simulation and keep on dreaming. There’s a power in those dreams.

“To articulate what is past does not mean to recognize ‘how it really was.’ It means to take control of a memory, as it flashes in a moment of danger.” – Walter Benjamin, On the Concept of History.