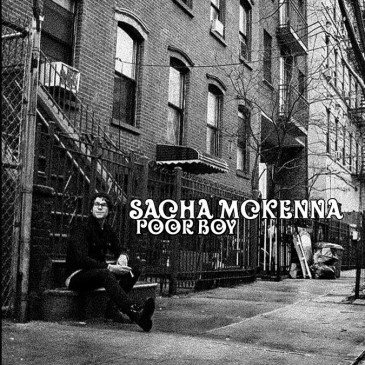 Poor Boy is written, performed, mixed, and produced by Vancouver artist Sacha Mckenna; former member of local punk group, Sisyphus. The album is a surreal, harrowing journey through the gradual inward withdrawal of a grieving artist. As Mckenna writes on his Bandcamp page: “Caroline is Poor Boy’s Muse. Caroline ends her life and Poor Boy is left without the will to create.” With track titles like “Heads Filled With Strange Things” and lyrics like “How do you breathe in air?” Poor Boy is a poetic and despairing narrative told through a fog of haunting vocals, hypnotic guitars, and ambient cityscape sounds.

The record opens with “They Meet In A Ballroom,” a scene-setting soundscape abuzz with activity — possibly people talking or cars moving — you can just barely identify. Out of that emerges a series of ballads driven by guitars high on echo and reverb mourning out minor and open chords. Poignant, ambient vocals smooth over the upper levels of the soundscape. There’s a brief, lighthearted highlight with track six, “Poor Boy, I Think You Should Be Happy,” as this instrumental mixes busy human chatter with a guitar jamming out a syncopated riff. However, anxiety eventually wriggles through as a new sound is looped in, accentuated with unidentifiable yelps that mix straight into the next track. The last tracks, “A Tower And Below A Beautiful Town” and “He Was A Poor Boy, A Waste Of Time” suggest to the listener the demise of Poor Boy.

Mckenna’s album is strangely melodious and somewhat shoegaze-y; it’s Slowdive-esque with narrative power and emotional rawness reminiscent of The Good Life’s Album of the Year. Tracks are expertly woven, but perhaps a little too much so. The album’s sound, though effective, becomes uniform and familiar too quickly. The vocals are heavily laden with effects to blur out their edges and lyrics are often difficult to perceive. Yet, Poor Boy manages to sound authentic and organic despite its highly produced sound; the album is a truly impressionistic experience that seems to play on multiple senses.