Due to a ticketing mix-up, I missed out on openers Micachu & the Shapes, arriving just as Deerhunter were about to take the stage. The Atlanta four-piece is known for lead singer/guitarist, Bradford Cox’s, somewhat erratic behavior, but their tight opening set was pretty uneventful (though Spoon’s Britt Daniel, Rob Pope and Eric Harvey all lending a hand at various points in Deerhunter’s set was a nice surprise). That, of course, didn’t mean they were boring, and the band proved they didn’t need anything more than their music to entertain the near-capactiy crowd at the Orpheum, churning out a set that pulled from throughout their catalogue, but leaned heavily on 2008’s Microcastle and a heavy dose of new tunes. If the songs they road tested are any indication, fans of their last effort are in for another treat.

Spoon might be the most economical band in indie rock. That’s not a comment on the ticket prices—which were fair, though not cheap—but on their music. I can’t think of another act that can do so much with so little. In fact, the band’s greatest strength might be knowing when not to play. It’s the kind of restraint on minimal arrangements like “The Way We Get By” (an obvious and rightful crowd favourite) that made the three guitar attack of the encore opening “I Saw the Light” so much more powerful. Though, even on the latter, there never seems to be a superfluous note in the mix. In between (and before and after), the band treated fans to songs from the last nine-years of their career, with their first two records, Telephono and A Series of Snakes, being the only efforts that didn’t get a nod at some point in the evening. They even reached all the way back to Girls Can Tell for a pair of numbers: live staple “Everything Hits At Once” and “Anything You Want,” which was introduced as being played “for the first time in a long time.” While the latter was definitely a treat, it’s almost impossible to pick a highlight. From deeper album cuts like “Rhythm and Soul” to a cover of the Damned’s “Love Song” to “hits” like “I Turn My Camera On,” the band was nearly flawless from start to finish. Coupled with Deerhunter, it was really a must-see evening of music. Hopefully, you caught it. 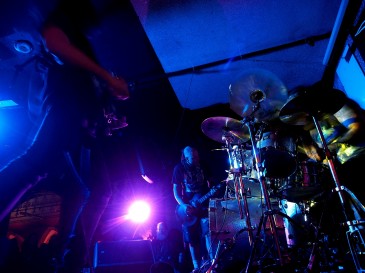